I just recently started reading The Shaolin Cowboy from Dark Horse Comics and so far it’s a blast. I’ve been familiar with the title and years ago browsed through the comic thinking that for the art alone, that it looked like something that I’d love to read. Well about six years ago was when the seventh and at that time the last issue was released. I forgot about the book, and honestly with comic books being around four bucks a pop it sometimes isn’t a matter of wanting to read a title, but choosing what I can afford. If it were up to me I’d be reading or trying out dozens of titles weekly. 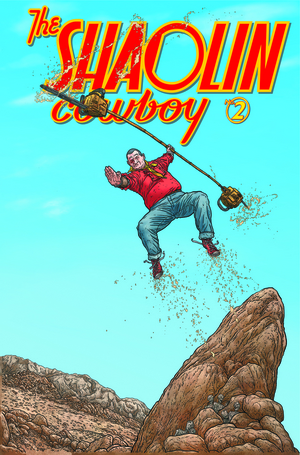 Well last month I saw The Shaolin Cowboy was back in a new mini series and this time I decided to give it a shot as honestly I’ve had a hard time getting into my favorite superhero books lately for whatever reason. Well I’m happy to say the book is delivering on a different level than I’m used to. Shaolin Cowboy doesn’t really seem to have a real plot, I could tell this by the weird “the story so far” section that preceded issue #1. The comic book is a strange dream like tale that is a real feast for the eyes! It’s artist Geoff Darrow is hands down one of the best, if not the best in the industry.

Issue #2 was a surreal treat, it featured thirty three straight pages of zombie carnage as the Shaolin Cowboy hacks, slashes, punches and kicks his way through a horde of undead, swinging a bo staff rigged with two chainsaws on each end. It’s a beautiful massacre and not a word is spoken in all thirty three pages. Darrow has claimed this book is his excuse to “draw whatever he wants” and the character “does whatever he wants”, I say that’s more than ok with me, I’ll be back for issue 3 and hopefully the last seven issues will be released in a trade soon.

Lastly, while reading the recent issue I’ve decided that they should consider making a movie based on this book. It’s clearly evident that The Shaolin Cowboy should be played by Sammo Hung. He’s the perfect age and look for the part, and I can only imagine him choreographing these bizarre fight scenes. From Sammo’s back catalog of weird ass movies I’d say he’d be perfect for the part and hell maybe even as director. I said it here first! 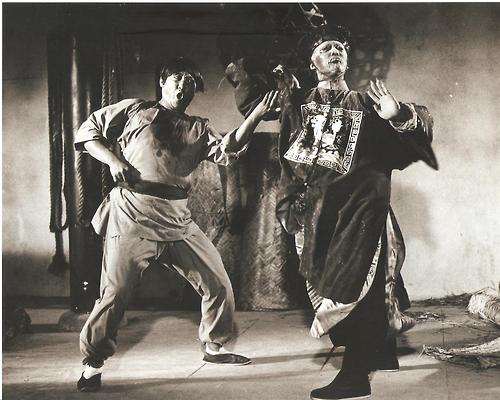