Here’s a pretty interesting little tale of midieval monster revenge, 2019’s ‘The Head Hunter’, a short & sweet little film that clocks in just a hair over 70 minutes in length. We follow a lonely barbarian who’s daughter is snatched up and killed by a monster that roams the nearby wilderness. We see clearly from the inside of his crude living quarters that he revels in killing monsters by his collection of their heads and this time it appears that the conflict is deeply personal. What’s most intriguing is just how simple the plot here is, there’s really only one actor in the whole film if I remember correctly, aside from a brief appearance of his daughter (and maybe a monster or two).

It gives it’s majority of run time featuring the barbarian all by his lonesome and really for the most part ignores his beast hunting almost entirely, only to reveal the aftermath prize of monster heads he brings home every now and again. Though light on the action, it still remains quite an effective slow burn. It takes a brief moment to reveal a world that’s much more fantastic and magical than what we’re mostly shown in a great scene where the barbarian quietly observes a giant troll (who looks pulled straight out of ‘Trollhunter’) towering past a mountain range.

Luckily the film wisely chose a short run time, as it does indeed skimp a bit on showing us any real action at least for most of it’s duration. It instead focuses more on a depressed warrior in solitude, who’s haunted by his daughters death and then late at night, creatures who lurk near his secluded forest home. Whatever budget the movie did have was used wisely with great locations, costuming and effective but subtle monster fx. We really feel the depression, heartbreak and loneliness of the barbarian and all of that set up makes the film’s simple but stunning finale all the more worth the wait. Add to that, a great twist to the whole story that wraps this tale up in a nice nasty bow. When the final confrontation occurs it goes some truly dark places with a creature that at first glance appears as if it’s barely a match for rough and tumble “Conan” style brawler.

For such a short and simple movie it was a real treat, as I’ve never seen a sword and sorcery style flick take this approach to monster slaying. Pretty impressive coming from the guy who directed “Thankskilling & Thankskilling 3” as well as the short film “Critters: Bounty Hunter” from 2014, none of which I’ve seen. After seeing The Head Hunter though I just might give ’em a shot. Check this one out if you dig stuff like Conan the Barbarian, don’t expect a grand spectacle and you’re probably going to enjoy this sweet little tale of revenge quite a bit.

Night’s Dominion is a brand new comic from Oni Press that came out today and the first issue is a pretty promising little start to what’s sure to be an epic adventure. I’ve been looking for a cool comic book to quench my thirst for fantasy adventure and stuff like Dungeons & Dragons for a while  now. Well this book could end my search with a strong first issue that’s a ton of fun & feels like the opening evening of a great classic game of D&D. The book is written and perfectly illustrated by Ted Naifeh. His artwork and rich colors are quite impressive as well, setting the tone of mystery nicely in this first issue. Excellent artwork is almost always a determining  factor of whether I’m gonna drop the cash for a new title. It’s also got some heft in the dialogue so it’s not a five minute blur which is always nice in this age of quick read comic books.

This debut issue essentially starts out much like most D&D campaigns, we’ve got a gang of interesting characters meeting in a dark, smokey tavern where an old bard proposes a dangerous journey in search of an ancient presumed treasure of legend. Of course it’s rumored this treasure is supposedly guarded by a menacing effigy. The group he proposes this to are an interesting bunch, a shady alchemist, his young assistant, an assassin and a bar maid who claims she’s secretly the greatest thief in all the kingdom.

It also in a way feels like a superhero story set in a classic fantasy world as by the end of the issue you’re introduced to a character that reminds you more of Batman than Aragorn. I totally dig it to as I’ve always thought of The Fellowship in the Lord of the Rings  & the teams formed in a classic game of Dungeons and Dragons to feel much more like a midieval version of The Avengers. It’s also got some nice meat to it as well as interesting character motivations and cool subplots that drive the desire to get rich for this band of vagabonds.

So if you’re looking for a strong, playful new title to pick up this week I think Night’s Dominion is a super solid offering. I’m feeling a bit of an Indiana Jones meets Lord of the Rings type vibe to the whole thing. if that’s the case then we’re dead set on a path to a ton of fun and hopefully it will take us on a memorable trek through some fantastic and dangerous landscapes. I’ll drop the four bones for issue #2 next month!

I know, I know what the HELL is this world coming to you ask? Just recently here we get a crazy report in Florida, which isn’t really that surprising, about a naked man eating the face off of another naked man under a bridge and grunting like a zombie. What’s up with that folks? I know I just had to at least address that because it’s pretty much the weirdest thing I’ve heard…well almost ever! Except for this maybe, did you know that if for some weird reason you go to prison and you’re a  rpg-er, chances are, won’t ever be able to play Dungeons & Dragons again!!! EVER!

Seriously if I were to some reason get life in the slammer I always thought that at the very least I could play some mad ass D&D!!! Think about it, you get locked up for years or maybe even life and all hope is lost…then you suddenly remember D&D is the perfect game for prison! Hell you could play every day, have countless rad adventures up til your dyin’ day…well no more folks. At least in Wisconsin, my native state, where courts decided in 2010 (which I first heard about now) to ban D&D! According to them it causes gang like behavior! Really?! They also went on to add Dungeons & Dragons could “foster an inmate’s obsession with escaping from the real-life correctional environment, fostering hostility, violence and escape behavior,” prison officials said in court. That could make it more difficult to rehabilitate prisoners and could endanger public safety, they said. They also noted D&D could lead to END_OF_DOCUMENT_TOKEN_TO_BE_REPLACED

Amazing animation, ultra violent and full of cool monsters this cartoon will blow your mind! END_OF_DOCUMENT_TOKEN_TO_BE_REPLACED

Check out this comic strip called Dark Dungeons ©1984 by Jack T. Chick LLC. These were passed out and used as a tool for equipping christians for evangelism in the 1980’s. I went to Catholic church but have somehow fell under the powers of the devil by my weekly D&D playing!!! Good thing i found these comics by Jack T. Chick online and got set straight-sorry guys D&D is officially cancelled-check this out!

END_OF_DOCUMENT_TOKEN_TO_BE_REPLACED

So before we get too far away from Christmas time i just HAD to throw some mad props up to this rad vhs tape i found this year called “The Life and Adventures of Santa Claus” at the local Goodwill. 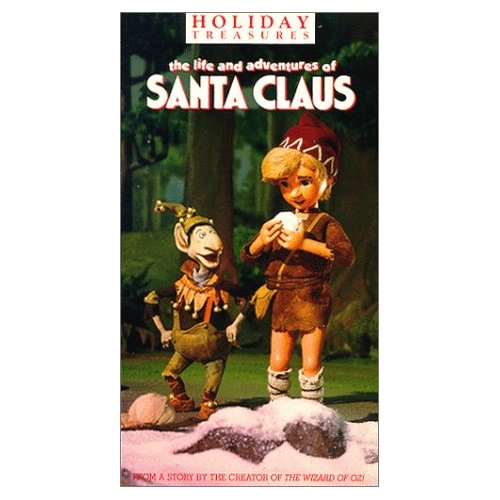 I am huge fan of the stop motion Christmas adventures-“Rudolph the Red Nosed Reindeer” had been my all time favorite until this year. I could tell when i found this vhs tape that i was in for a treat! It too was made by Ranki/Bass in 1985 and was written by Wizard of Oz creator L. Frank Baum. Basically it’s a story of how Santa Claus came to be. You’d never know Santa had such an awesome upbringing.

In this story he is raised in the magical forest of Burzee by a group of immortal wizards and fairies. However as he gets older he gets sent out into the mortal world to spread joy to the world with his weird annoying elven buddy Tingler and his tiger Sheagra. Once there however things get difficult for ol’ Santa. After making some toys for some local children his plans are thwarted by a group of beastly, toy hatin’, Orc like monsters who can turn invisible at will. So Santa goes to war with the help of his wizard buddies in a battle for Christmas. Yeah it’s pretty epic and by far the BEST Christmas adventure of all time. So next year try and find this little gem maybe they’ll release it on DVD or even better maybe Peter Jackson could make this one into a live action movie!