I had a super sweet VHS swap at my store, Hollywood Babylon, in Portland Oregon a couple weeks ago and picked up some pretty promising picks on tape- Most notably ‘Wheels of Terror’ from 1990. A movie that luckily lives up to its sweet VHS cover!

Originally an R rated, made for TV movie appearing on the USA Network, I admittedly didn’t have very high hopes for what would unfold on screen. As a big fan of road road horror I’m happy to report that this one really went the distance. Directed by Christopher Cain, most notably known for ‘Young Guns’ and ‘The Next Karate Kid’, I’d have never suspected he’d be capable of such a taut and effective tale of terror.  This would be a great  one to pair up with ‘The Hitcher’, ‘Duel’ or ‘Road Games’ for one helluva solid double feature.

‘Wheels’ pulls no damn punches and UPS the ante for some real high stakes horror!  In a nutshell it is the story of a single mother and her daughter who move to a small town in the desert. Mom’s a school bus driver, trying to get into the swing of small town life, it should be a simple adjustment right? WRONG! This small town has a BIG problem, a psychotic child predator is on the loose, abducting kids in his super fucked of sketchy demonic looking black car. Pretty messed up place to live huh? You bet!! Bad move Momma!

Well luckily the local mechanic souped up Mom’s school bus with a freakin’ race car engine, how’s that for foreshadowing?  Things get super tense real fast as the psycho driver begins to target the town zeroing in on the Mom’s daughter, arriving at their house reving his screechin’ engine in the dead of night. 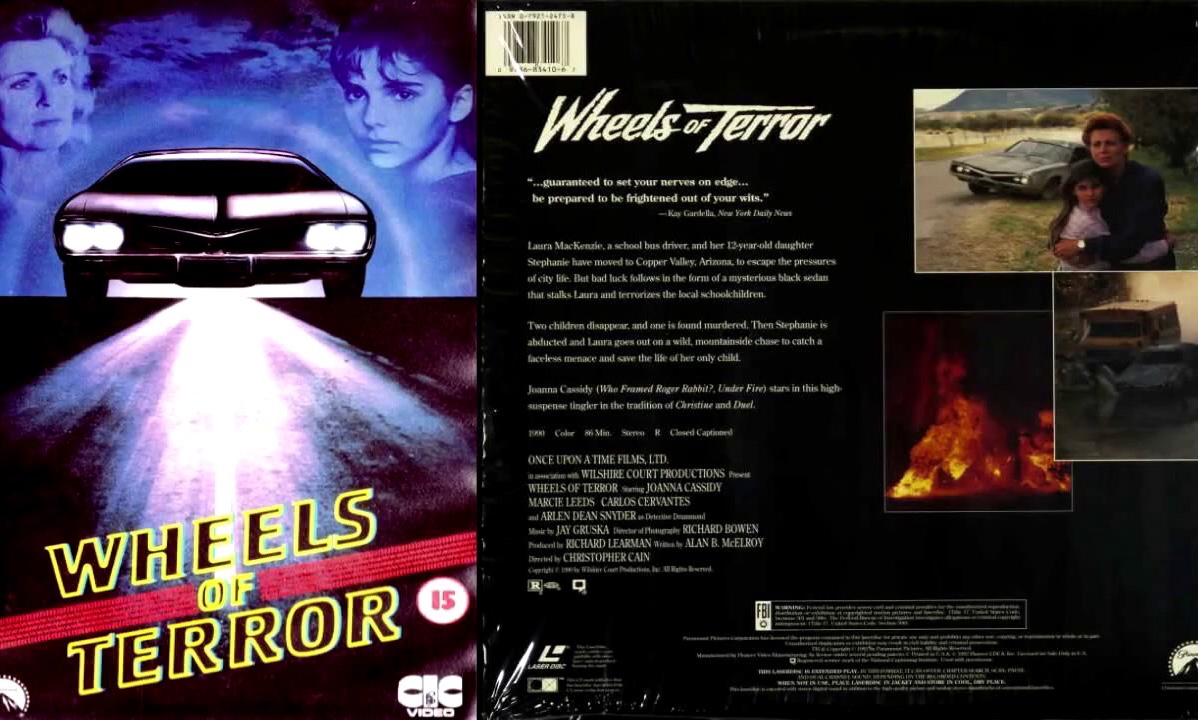 At times it almost appears like the psycho is some sort of supernatural presence as no one seems to notice this bizarre freaky ass car driving around in broad daylight with no goddamn muffler! There’s a lot of suspension of disbelief that you might need a to really take this movie seriously but what it lacks in “grounded reality” It more than makes up for in tension.

It would be one thing if it was simply a mass murderer driving around in a car but the fact that it’s a creepy sex offender makes the stakes shoot through the roof.  And once you get to the real meat and potatoes of the movie the final act is a goddamn balls to the wall action packed literal demolition derby thrill ride! Filled with great stunts, unexpected twists and fucking unrelenting killer road rage.

It’s lean run time of under 85 minutes also makes this one pack a powerful punch and is the perfect movie to watch with the rowdy gang of hungry cinefiles! I’d say my only real problem with ‘Wheels of Terror’ is the promise of some sort of mysterious reveal that might rear its ugly head in it’s finale that never comes sadly. Still its a bonafide lost hidden gem, full of action a’ plenty, strong characters and one wickedly terrifying villain! Hunt this little gem down and please someone give this nasty little flick a sweet blu ray release!!

So I still use than damn red envelope Netflix service! Yes, it’s true, DVDs still come to my residence regularly. Yes, I may be one of the last people in the country but hey let’s be honest, the selection of DVD’s they have are far and away better than the forgettable movies & bland series they churn out onto their streaming service. Well, yesterday they delivered an interesting one to my mail box: 2003’s ‘Highwaymen’ from Robert Harmon the director of 1986’s ‘The Hitcher’, easily one of the best highway horror movies of ALL time. Well it turns out Harmon had another trick up his sleeve that he saved for the 2000’s, between his run on the Tom Selleck ‘Jesse Stone’ movies (ok that I was surprised to find out about). Hey that’s besides the point because Harmon clearly has some skills when he gets into his element of car related horror, at least I think so!

I had very, very low expectations for ‘Highwaymen’, the early 2000’s aren’t exactly my choice era for movie viewing and my discovery of his ‘Jesse Stone’ flicks didn’t exactly add to the excitement (or maybe I’m missing something? Are the Jesse Stone movies actually totally RAD?!). However from the opening of this one my interest was peaked and a weird movie that hung around in my queue for ages began to transform into somewhat of a forgotten gem before my very eyes. Jim Cavezial stars as traumatized husband who witnesses his wife murdered in broad daylight, while walking on the side of a country road from a clearly intentional hit and run. From there we skip ahead in time and it seems the same 1972 Cadillac Eldorado is back on the road and out for some more deadly “hit and run” fun, this time targeting two women driving at night on the highway. From behind the beastly car’s wheel we can see a strange man with crude prosthetic limbs aggressively shifting the gears and enjoying the roadway terror all too much. 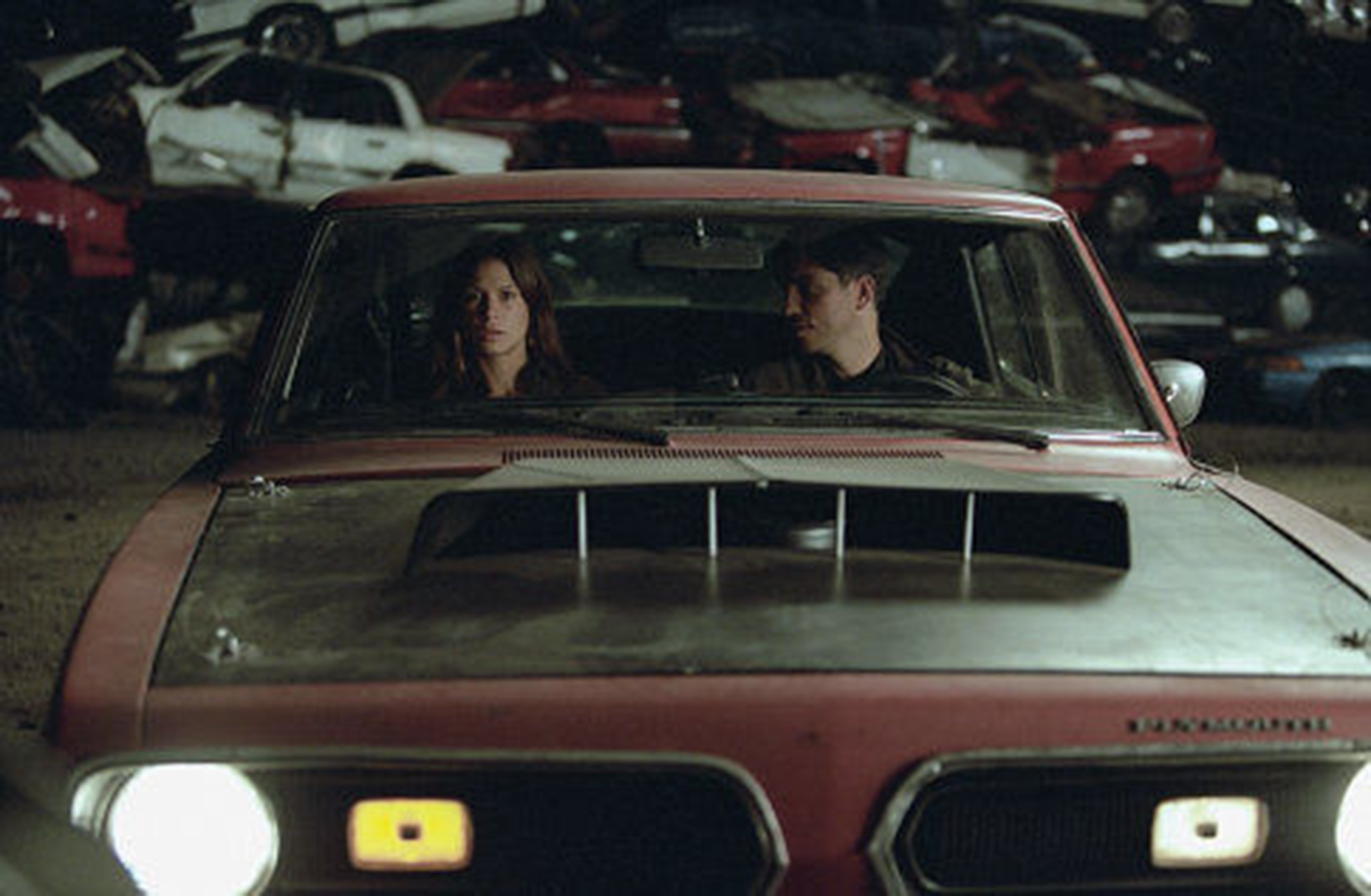 Only one of the women survives the encounter and ends up meeting Cavezial seemingly “by chance” and the two embark on a creepy road adventure to get revenge on the maniac serial killer driver. I was pleasantly surprised by how entertaining this one was and that might be because of just how absurd this one’s plot really is and how straight it’s all played. You’re going to have to suspend your disbelief for pretty much every action sequence here, as I said it’s totally absurd but in the best ways possible.

That’s not say they’re not totally enjoyable, action packed and thrilling, Harmon’s got the chops here and jam packs some crazy ass shit into a barely 80 minute run time and it’s all beautifully filmed. There’s some epic road battles here and the psycho villain (who’d probably hung out with Rutger Hauer’s character from the Hitcher back in the 80’s), simply referred to as “Fargo” is a bizarre creation as he’s essentially merged with his vintage car to cause ultimate terror on the highway. Throw in a little ridiculous backstory and you’e got a pretty unique little highway horror flick that’s pace never lets up.

If you’re looking for a quick, action packed, car based horror thriller this one is a pretty fun one that’d be perfect to pair up as the opening act for a double feature with the 1986 cult classic ‘The Hitcher’! It’s not gotten much love over the years, probably because no one’s really heard of it or given it a chance (damn you Jesse Stone!). However as far as road based horror goes I think Highwayman is on it’s way to becoming a cult classic as it’s, at least in my opinion, in my opinion aged quite well over the last 17 years! Give it a shot!

It was finally time to check out a sequel for one of my fave horror movies of all time, The Hitcher! Yep, what many people don’t know is that they did indeed make a sequel for the 1986 classic. No, this ain’t a sequel to the highly un-needed  2007 remake. “The Hitcher 2: I’ve Been Waiting” came out in 2003, yeah it took me ten years to finally become curious enough in this movie to check it out. Perhaps this sudden interest came in a recent conversation about the films villain, played by none other than Jake Busey.

So some might think, a sequel for The Hitcher might just be about some random folks who pick up another crazed hitchhiker. Well what kind of sequel would that really be?! Nope! This one succeeds on one level, by bringing C. Thomas Howell, the original’s hero, Jim Halsey back! Now that’s what I like to see in a sequel, the original star power return. However cool this seems it makes you wonder how in holy hell Jim Halsey could realistically ever pick up another hitchhiker after the crazy shit that went down in the original?!!

To me, it didn’t really matter at first because it was just pretty cool seeing him onscreen 17 years later, as the same character and seeing just what the hell that character was up to. Turns out he was a cop, he flies planes and he’s a little crazy. Rightfully so! Halsey has been struggling still with those visions of the events of the original film shown in flashbacks throughout. He’s wound so tight that he decides to go on a road trip with his girlfriend, flying there in his plane and then picking up a car to drive down that same highway Rutger Hauer terrorized him on in 1986!

Sounds good thus far right? Well things get real stupid REAL quick folks. Yep it doesn’t take long before they see a man crash his motorcycle and then jump onto the side of the road……..yeah….hitchhiking!!! Now there’s no WAY Halsey would ever pick up another one of these guys right?! WRONG! His girlfriend talks him into it and there you have it, motherfuckin’ Jake Busey and his big ass teeth sitting in the back seat of the car. BAD bad news. Now what are the god damn chances that the one hitchhiker Jim Halsey sees after driving the damn car for like 15 minutes down the road would be a god damn psychotic serial killer?!! Apparently Halsey is a hitchhiking serial killer magnet! The sheer absurdity of this damn story line is almost brilliant! This movie is just so damn stupid I couldn’t turn the shit off!

Let me make this point clear as day Jake Busey is most certainly NOT Rutger Hauer!! Busey’s attempt at recreating Hauer’s intensity is laughable at best. He gives a ton of lame ass one liners every chance he gets and comes across as an incredibly irritating nitwit rather than remotely frightening. When Hauer was in the car it made you cringe, but when Busey’s in the back seat you just wanna slap the shit out of him for acting like such a nimrod.

So what follows really is pretty forgettable. It’s kinda the same plot as the first one, with maybe one unexpected event to keep it mildly disappointingly interesting. Hell Busey even uses the whole “finger in the french fries” schtick in this one too as each and every turn of the film ends up with some moronic dialogue with Busey somehow convincing the cops he’s just an innocent bystander. Perhaps they just thought he was mentally challenged? Oh yeah and let’s not forget they throw in the “roped to the semi” shit again too. But as with most everything this film delivers it never amounts to anything remotely interesting just to more shitty dialogue from the oh so “crazy” Busey. I’d say this one is a full on grade A suck fest and the only reason to check this out is to see C. Thomas Howell as Jim Halsey one last time. If you’re a fan of moronic sequels that fail miserably this one is a MUST see!!!