It’s come to my attention that Wilfred Brimley has sadly passed away, many knew him as simply the man telling us all to check our blood sugar in those vintage diabetes awareness commercials. However the truth is he starred in the fourth greatest Star Wars movie, ‘Ewoks: The Battle for Endor’. That is not a joke either and many others have also agreed when it actually comes to the Star Wars movies recently after much deliberation. It turns out that in reality, after the original trilogy, 1985’s ‘The Battle for Endor’ is indeed not only better than the Prequel Trilogy but also superior as well to all of the Disney “Star Wars” films.

Wilfred co-starred in the movie along with Warwick Davis (Wicket) for the George Lucas penned epic adventure, which I hope some day gets a blu ray release. Again, I am not kidding, ‘The Battle for Endor’ has aged extremely well, so much so that John Favreau even put a nod to the movie in The Mandalorian. Wilfred starred as Noa Briqualon and aided the Ewoks in an epic battle against evil forces. Wilfred also had an iconic role in 1982’s epic monster movie ‘The Thing’ & also another of my favorite 80’s films ‘Cocoon’. Wilfred had been sick for two months with a kidney ailment and his fight finally ended today. He was an icon in his own right and even appeared in a cool 90’s alien horror movie I just watched for the first time a few nights ago, ‘Progeny’. Rest in peace Wilfred and thanks again for your role in the 4th BEST Star Wars film of all time…..

Ok so by now everyone has probably seen the new ‘Star Wars Episode IX’ trailer, but I’ve yet to hear anyone talking about the possible return of one of the missing legacy characters from the original trilogy….WICKET and the Ewoks!!

So in the trailer it’s highly theorized that Rey & Co are returning to the forest moon of Endor, where we’re shown the old decayed wreckage of the second Death Star had likely crashed down upon. As a HUGE fan of ‘Return of the Jedi’ and an unashamed fan of the damn Ewoks I’ll admit my mind immediately went to the possibility of their return when I saw the debut trailer for ‘The Rise of Skywalker’. Who in 2019 can’t admit that the Ewoks were actually kinda bad asses? Come on now folks, people have shown a new love for the prequels lately, so I assume by this point in time we can admit that the Ewoks weren’t that bad and just maybe that in reality they were actually pretty awesome! Some things age really well with time and Ewoks are definitely one of em’ in my opinion. I’ll go on record here to state that the two ‘Ewok Adventure’ movies 1985’s Caravan of Courage & 1984’s ‘The Battle for Endor’ are two movies that I personally enjoy more than the prequels AND this Disney Star Wars stuff. 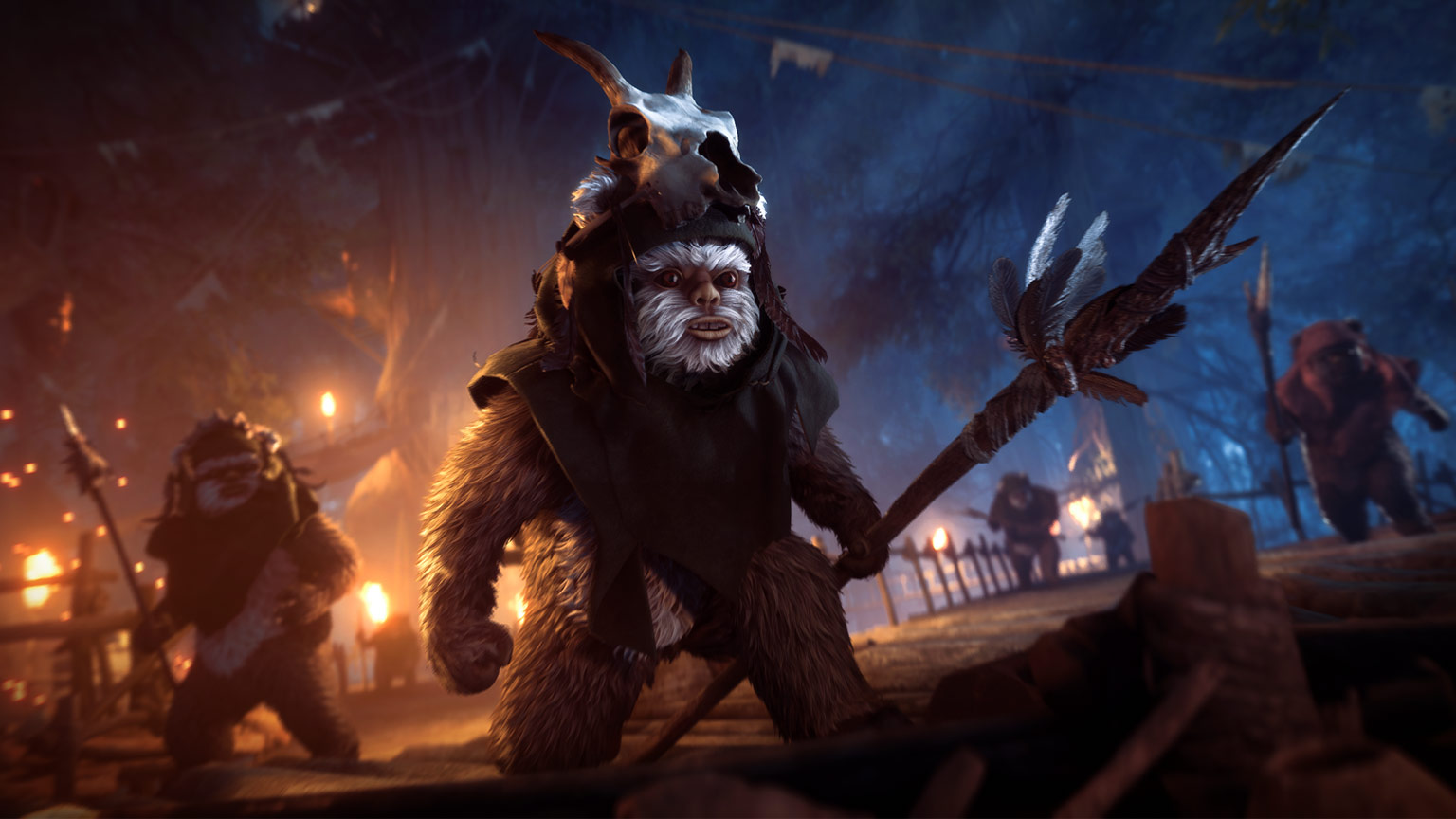 Go ahead, re-watch those movies and tell me they aren’t a ton of cheezy fun, filled with awesome creatures and even a little bit of that classic vibe of the originals. Whether you like it or not Wicket is a bonafide legacy character, that if you think about it got more screen time within The Return of the Jedi and the two feature length ‘Ewok Adventure’ movies than most of our favorite OG classic trilogy characters. Let’s not forget too that BOTH of the Ewok movies were written by Star Wars creator George Lucas and if we can give a god damn Porg real screen time in these new Star Wars movies then we certainly should be able to see the return of at the very least, Warwick Davis as Wicket.

I’ve got my fingers crossed that if Rey & Co. are indeed on the moon of Endor they’ll be escorted through the dangers of the forest to the wreckage of the Death Star by the Ewoks. I’m at this point not yet overly excited by ‘Episode IX’ even after the first trailer. That being said, I do admit that my level of interest has certainly been raised and I’m pretty open to whatever’s gonna happen next as I’ve got no real expectations for this last installment. ‘The Last Jedi’ all but sunk my Star Wars ship and I’ve no real investment in what ultimately comes to be for the new characters. So for me seeing the Ewoks return would be at least a ton of fun (as long as they can resist the urge to kill off Wicket). I think this time around they could even improve upon their look and maybe even make them a bit more badass (have you seen them in the Star Wars Battlefront II: Ewok Hunt?).

No matter what you think about the furry little devils you’ve at least gotta admit they’re a big part of Star Wars history and unlike the Porgs they were real characters that helped defeat the Empire in an epic battle. If we’re not going to get any more real action from Luke or Han at this point why the hell not revisit our furry friends from the moon of Endor. They must still be out there and likely are gigantic legends in the lore that today inspires Rey, Finn & Poe. Like it or NOT!!