I am not sure what made me think about this today but I thought I needed to pay a little respect to one of the coolest toys ever-Stretch X-Ray! He appeared in 1979 as Stretch Armstrong’s most deadly enemy and man was this guy the envy of all kids including myself! He was such a hard ass with his see through “x-ray” body that you could even see all his inner organs!! 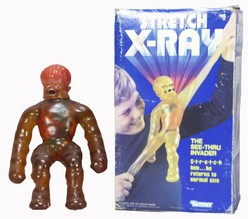 This guy was so much of an improvement on the Stretch Octopus character who I always thought was kinda a douche!! I mean check out his lame face they gave him! Some one needs too kick Stretch Octopus’ ass to the moon already! 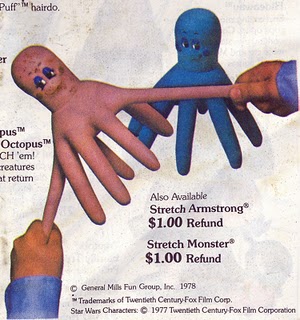 Now it’s a no brainer obviously that Stretch X-ray was way cool but was he as cool as Stretch Monster though? I don’t think so-but I have a soft spot for any monster who resembles the Incredible Hulk’s arch enemy The Abomination. And what’s up with young Spock playing with Stretch Monster in this pic below? Ummm…AMAZING! 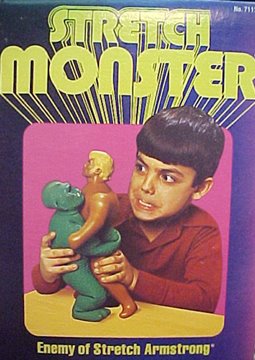 Thinking of Stretch Monster has also led me on a wild goose chase on the internet today desperately trying to figure out the proper name to one of my other favorite monster toys from the 80’s. This particular toy monster was green as well and infact quite similar to Stretch Monster in looks. He was probably almost 2 feet tall, green and actually kinda resembled Whiplash from the Masters of the Universe line of action figures. The cool thing about him was that you could crush him into a ball as he was filled mainly with air and then from what I remember you could inflate him back to his normal size by pulling something on his belt? Does this ring a bell for anyone?? Anyway if anyone knows what I’m talking about please let me know-it’s killing me as I’ve been searching on ebay and You Tube for commercials of this bad ass! Anyway the thought of Stretch X-Ray once again proves that vintage monsters still rule the school!!!