Hey happy damn 4th of July America! So today it’s just all about the USA right? You bet! Well let’s take a quick break from all of the red, white & blue festivities to pay some tribute to four lesser known superheroes who are NOT Captain America that also have an unhealthy but awesomely bizarre obsession with the United States! There’s just nothing quite like a patriotic weirdo superhero on the 4th!

Yeah this guy is indeed a weirdo, I mean look at his utterly ridiculous costume he came up with and thought would scare the bejeezus out of all of the nasty supervillains who come to threaten the good ol’ USA! William Naslund came on the Marvel Comics scene back in 1977 and for a very brief period even assumed the mantle of Captain America! WOW. He has no superhuman powers but did manage to fashion himself a bulletproof cape!

Ok so if you thought Spirit of 76 had a dumb look, well DC Comic’s Uncle Sam has taken the patriotic thing to the god damn extreme! This guy would put fear into the hearts of evil doers just by the possibility of how crazy he’d have to be to don a costume that ridiculously yet awesomely pathetic! He first appeared WAY back in Quality Comics in 1940 and then was brought into the DC universe officially in 1973. Get this, Uncle Sam is described as a spiritual entity created through an occult ritual by the Founding Fathers. Damn, no wonder why he’s so freaky. Sam’s got super strength, invulnerability, the ability to alter his size, enhanced speed, along with some degree of clairvoyance. He also can teleport to a pocket dimension called ‘The Heartland’. Whatta guy huh? 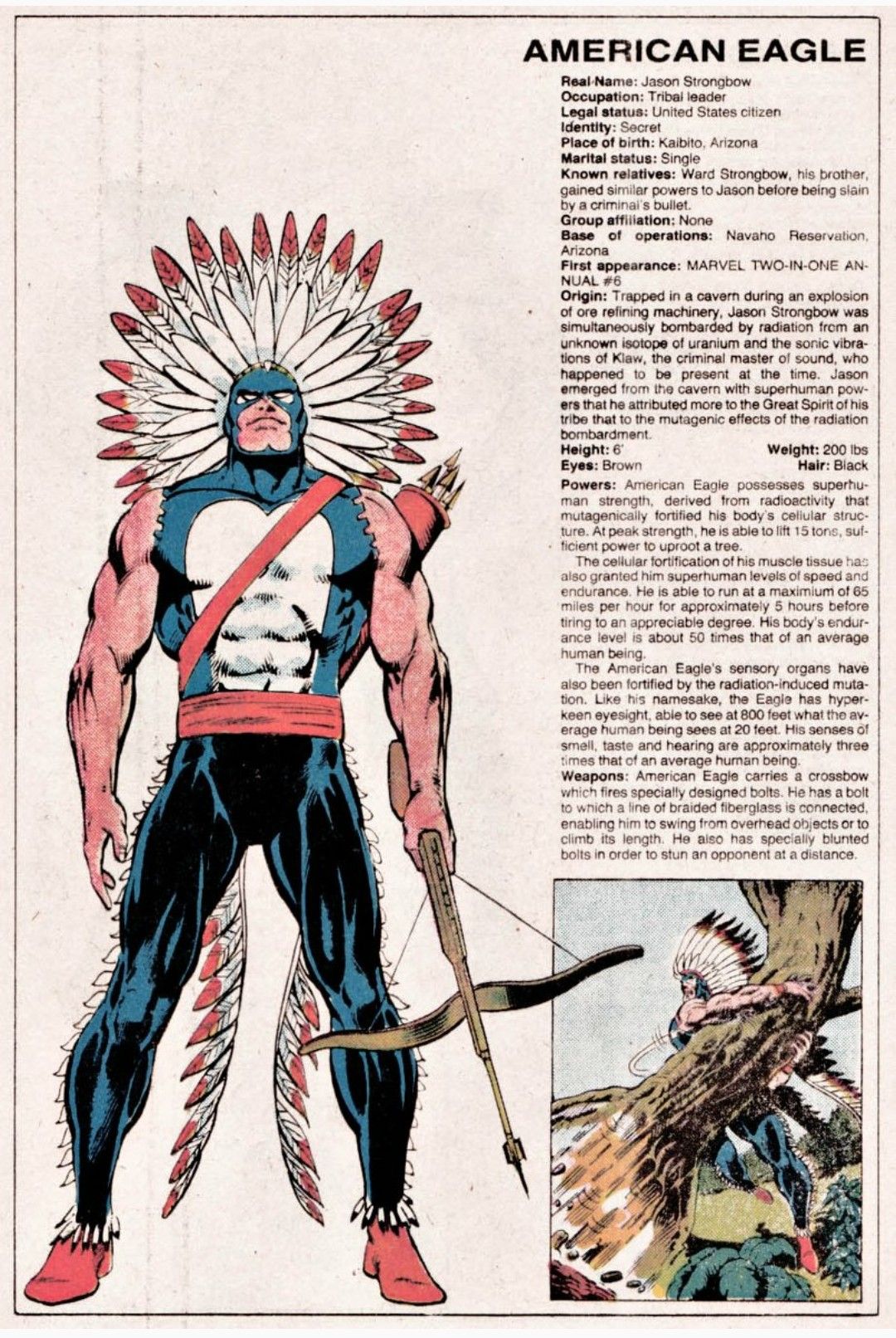 Well here’s a dude who I can finally get behind. American Eagle is a total badass and deserves more love in Marvel Comics. Born as Jason Strongbow, a name he should have just used instead of American Eagle IMO, he first appeared in a team up with The Thing back in 1981. A member of the Navajo Nation, American Eagle possesses superhuman strength, enabling him to bench press approximately 15 tons! He also possesses superhuman speed, agility, stamina, and sturdiness as a result of radiation-induced mutation. He later got a less cultural looking costume:

He’s featured, along with our next hero in one of my favorite modern Marvel Comics stories featured in Thunderbolts #112-115 from 2007 that is a MUST read!

Here’s another guy who just could never quite get the recognition of his idol Captain America. He even settled for a second rate moniker to fight crime. Yet Jack Flag is still a pretty cool guy, even if he’s obsessed a bit too much with his country. First appearing on the scene on 1994 as part of Captain America’s computer hotline network, Flag has proven himself to be an interesting character, who was inspired by his hero Captain America to become one himself. In that same Thunderbolts run I mentioned above, where Jack Flag like The American Eagle both stand up for their Constitutional rights against the United States government during the superhuman registration act!  As you can see in the picture he has been noted to go the full distance dying his hair red white and blue!