I recently checked out a pretty sweet little horror anthology from 1985 called ‘Night Train to Terror’ on VHS and it did indeed deliver the goods, especially in that oh so ridiculously sweet 80’s way. It’s not always easy to find a decent horror anthology but this one had a certain charm about it especially with it’s rather ambitious special fx & visuals that really made it such a damn good time. 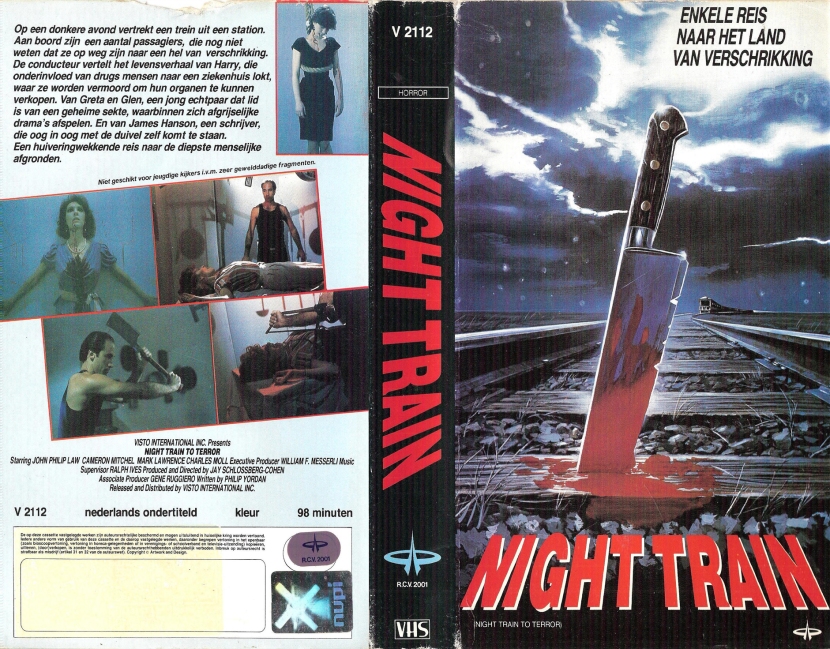 The movie certainly kicks off with a total bang as we’re thrust into a full blown dance party on a train, with crazy 80’s fashion, a super cheezed out band rockin’ performing a totally “rad” third rate pop song. Now that’s a train I want to reserve a seat on! Anyway, soon we realize that God and Satan are also on a train that’s flying through outer space and trying to determine who will live on the party train as it’s going to crash. This is where we see the frightening tales of evil materialize on screen as it sets the stage for the stories involving some of the more questionable passengers.

So what we’ve got here are a few cool tales of terror, what’s really interesting is these stories here are all apparently edited versions of different horror films: Death Wish Club, Cataclysm and an unfinished movie project with Richard Moll (of Night Court fame) called Scream Your Head Off. Yeah and if you’re for some reason a big Richard Moll fan you’ll be pleased to know he stars in two of the segments! Also while we’re on the hot topic of Richard Moll flicks, you’ve got to check out ‘The Dungeonmaster’ from 1984, which is easily one of the most ridiculously fun horror/Sci fi flicks of the 80s. So back to the Night Train, it would seem one reason why these segments work so well is that they’ve likely trimmed out all of the excess fat from these movies and got to get straight to the damn point. So many obscure 80’s horror flicks would be bonafide cult classics if they’d trim 20 or so minutes from their run times. That’s a fact!

Yep, Night Train has got a lot to offer in it’s spooky entries, but don’t expect shit to make a heckuva lot of sense. The stories are actually kinda confusing, probably because they’ve been majorly butchered to pieces. That being said, there’s some cool shit going on, there’s one about a dude who drugs women, then kills them only to collect their organs. There’s a ton of nudity and some gore and of course Richard Moll shows up. The next segment’s about a freaky ass death club, whose members are obsessed with near death experiences, not the “out of body” stuff but like putting themselves into elaborate death traps to see if they can survive it. This one’s also pretty damn confusing, but there’s some cool ass traps and a rad killer insect that they let out of a bottle to fly around them at a dinner table..oh yeah and then some killer big hungry monster bugs! Lastly the third one was fucking fantastic, It had some weird ass Nazi guy who never ages, you guessed it…more Richard Moll, monsters a plenty and a totally excellent stop-motion animation creature sequence.  This one’s story is super confusing as well, or maybe i’m just stupid, but it doesn’t really matter because it’s all 80’s gory goodness. I’d say just drink some booze and smoke a joint before watching, as it’s not there to wow anyone with a well crafted story that’s for sure!

So check this one out if you’re in the mood for a sweet 1980’s horror party flick, it delivers on all levels and you really don’t have to pay much attention to what’s going on, just sit back and enjoy the goofy ambition of it all…

I recently checked out an awesome early 80’s flick called ‘Evilspeak’ starring everybody’s favorite awkward actor Clint Howard who’s the younger brother of superstar director Ron Howard. Evilspeak delivers all the goods besides having Clint Howard in the lead it’s got some gruesome fx, a truly unique story and some pretty cool sets. It’s also got a swarm of possessed pigs that are more than willing to carry out the evil deeds of the devil! So track this one down if you get the chance, it’s totally worth it. Now one last thing obviously this one had got going for was the incredible VHS box cover art! One of my faves…

Well I also realized that this artist C. Winston Taylor is responsible for many of my favorite movie posters and box art of the 1970’s and 80’s in fact it turns out that he did the cover art for one of the other blogs I did recently for the movie Mutant Hunt! Also check out the blog post on with more details on his artwork on another cool ass blog I dig: Camera Viscera!!

I know there’s a select group of people who probably actually care about the films of Charles Band, but to me he’s a legendary dude in the scheme of cheezy horror flicks of the 80’s! So I’m thrilled myself, just to find out about this lost movie called “Pulse Pounders” which was filmed way back in 1987 and has never really seen the light of day! This flick is an anthology, consisting of three tales of “terror” one being an adaptation of H.P. Lovecraft’s The Evil Clergyman starring Jeffrey Combs, the next being a sequel to the movie “Trancers” and the last being a sequel to one of my favorite ridiculously awesome movies of the 80’s The Dungeonmaster which stars Richard Moll & W.A.S.P…….yeah the metal band!

Now the first two segments were actually already released, the Lovecraft tale was released on dvd in 2012 (I have not seen it yet) and the Trancers one was released in 2013. However the segment I’m most excited for has yet to see the light of day, perhaps saving the best for last?

Anyway if you have not seen The Dungeonmaster I highly recommend hunting that down and watching it with plenty of booze and a good group of friends. It’s the perfect party flick. Don’t believe me check this out:

So the movie is planned to be released in it’s entirety on the Full Moon Streaming site, as far as I know it hasn’t been featured there yet but this news which may be old news to some of you has got me quite excited! It’s a rare treat when you find out that a movie that’s been shelved for over two decades gets a real release. In this case a movie I never even knew existed. Supposedly the company set to release the movie folded back in the late 80’s. So hopefully this will be worth the wait!