Black Panther is clearly all the rage at the box office and it’s crazy that he wasn’t introduced sooner to the Marvel cinematic universe. We had to wait roughly 10 years for his solo flick since the MCU kicked off, maybe Marvel was strategically timing his arrival with current trends in the news and social media? Whatever the case thinking about the gigantic monetary success of ‘The Panther’ I’m certain people over at Disney/Marvel are scheming what characters will be the next smash sensation and I’m certain they’re considering just how the racial background of them might help bring in the big bucks once again. Let’s face it, the white dude superhero can clearly get a little stale sometimes. So who’re the top contenders that Marvel might introduce to the moviegoing public? Here’s my predictions and hopes:

Shang Chi is clearly at the top of the list when I think about what Marvel might have planned next after the success of The Black Panther. It seems like Marvel and Disney are pretty concerned about their Chinese audience when it comes to releasing new movies as they can make a ton of money there. So if they play their cards right perhaps the legendary Master of Kung Fu could woo audiences in the USA and abroad? I think so, imagine a Marvel Kung Fu flick done right with crazy over the top superhuman martial arts action on the big screen. They could achieve what they should have with Iron Fist and give everyone the action extravaganza they craved for the Netflix character. I’d love to see him come to life on the big screen, he’s a true classic character that deserves more respect..

END_OF_DOCUMENT_TOKEN_TO_BE_REPLACED

Wow, I wasn’t even planning on writing about ‘Star Wars: The Last Jedi’ because let’s face it, there’s enough material about this movie online for you to read for decades. However after seeing the movie and being thoroughly disappointed, (and more so everyday the more I think about it) I’ve become well aware that I’m NOT the only one who feels this way. Some SPOILERS ahead….

What inspired me to write this post is the recent news of the giant backlash against the movie from fans simply being called a conspiracy by anti-social justice warriors who’re irate about the inclusion of strong female characters & racial diversity in the new movie. It’s claimed they’ve essentially hacked Rotten Tomatoes and have brought the fan score to a whopping low of 54% while the critics reviews rate it 92% fresh. I’ve decided to put my opinion here, to state as a long time fan, since I was a little boy, that the reason I disliked The Last Jedi has absolutely zero to do with strong female characters, white males, racial diversity, or anything that has to do with the current political landscape of the real world.

It actually upsets me that Disney simply can’t accept the fact that maybe, just maybe, their $200 million plus budget movie might not have pleased a huge number of long time fans. I can see many reasons why people absolutely love The Last Jedi AND I can also see just as many reasons why people may absolutely despise it. It may for some all revolve around shitty people being racist, sexist, bigots who’re furious about Rey being female and Finn being a black male fronting the franchise now. I however don’t think that’s the case for most, as The Force Awakens holds an 88% on Rotten Tomatoes by fans and I highly doubt everyone suddenly became upset about the sex and race of characters between the last movie and this one. No, the people I know who were disappointed had completely different issues with the movie entirely. END_OF_DOCUMENT_TOKEN_TO_BE_REPLACED

So the controversy continues to grow around Spider-man and his introduction into the Marvel Universe films-now what we’re hearing is that Spider-man may not be the skinny white dude he’s been in the comic books for, well ever…We’re being tempted with him being African American instead and that he may not even be Peter Parker in this movie universe. Instead we hear he may take on the Miles Morales Ultimate universe persona of the character. So I’ve been thinking what’s the motivation behind mixing things up?

Well first it seems to me that the Marvel Universe films are lacking some awesome black characters. I personally don’t think they need to make any changes to Spider-man. In fact I just want to see Marvel take the character and do it right, showing Sony how to do Spidey the Marvel way. And can we PLEASE get a true representation of the damn Green Goblin already? Pleeeez?!!  I do think it’d be great to get some more characters in the mix of different races focused on-so don’t change Spider-man just give us some cool existing characters of the Marvel universe. Let’s see now, we already have Black Panther in the works, we’re getting Luke Cage and possibly the Falcon donning the Captain America duds after the upcoming third movie. If they really want to bring a little more besides a bunch of white dude superheroes bouncing around all over the place here are just a few ideas:

It’s time to bring back Blade-Give Snipes his role back! He doesn’t always need to fighting Vampires either!

Bring the Bill Foster Goliath into the Avengers! They already fucked up the Hank Pym character, so have Foster take the role again!

Yeah a Deathlok movie would be pretty damn awesome…nuff said!

Bring Jim Rhodes in to take over for Tony Stark as he did way back in the 80’s. He was Iron man for well over two years!

Can we please get a hyper-action superhuman kung fu extravaganza with some Shang Chi on the big screen already?!!

I think it’s a big mistake to put Miles Morales in place of Peter Parker at least at first. Spider-man isn’t broken(besides in the Sony movies), he doesn’t need to be changed. If he is well so be it, maybe it’ll be an awesome movie regardless I’ll be there to check it out either way. But the fact of the matter is that I’m a comic book fan, I want to see Parker, the original Spider-man. I hope to see him first don the suit, then when his time is up feel free to put Miles into the role of the legendary webslinger. In the mean time let’s choose some great superheroes to come to life who deserve a shot, ones that us comic fans spent years following.. what do you think?!

Wow…slap in the face is an understatement on this one folks. In case you are not aware, ancient carrier pigeons are still faster than some of today’s methods of carry high volumes of data. According to BiongBiong.net, a South African IT company got so fed up with the national Telkom’s notoriously poor Internet service that they decided to set up a race that pitted the Telkom’s network against a carrier pigeon. Yeah, and the pigeon won. 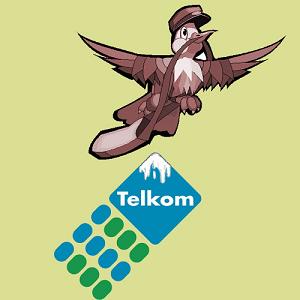