Has anyone been checking out the latest season of ‘Curb Your Enthusiasm’? Am I the only one who’s feels like this show has seriously lost it’s original charm? It’s been a while since we’ve seen ol’ Larry David in action (six years to be exact) and now he’s finally returned to get back into all those uncomfortable situations most people have similarly experienced at some point in our lives. Well after checking out the last few episodes of this new season, which I was pumped about, it’s clear Larry and Co. have ultimately lost the brilliant situational comedy the show’s most well known for. Every damn situation he gets himself into feels incredibly forced & too dang silly to really feel relatable to anymore. Most of all this new season so far feels A LOT like a parody of itself.

‘Curb’ feels like it’s lost it’s originality, now putting Larry into situations that unfold in the most predictable ways possible. From miles away you can see where every awkward moment is going end up. Whether he’s opening a pickle jar or grabbing cookies in a hotel lobby with his fingers rather than the tongs, it always advances the show’s plot to another unbelievable level. It’s maybe just gotten a bit too self aware for it’s own good? For me the past seasons for the most part, felt like Larry was existing in the real world and it made all of his antics that much more relatable. You’d feel like, you’d been there before and many times Mr. David would say the shit you’d wished you could, but were too afraid of suffering the consequences.

Now no matter where he goes he’s always got people who feel like they’re programmed to cause a stink over anything and everything the dude does. Like Portlandia some of these situations just drag on far too long now and a lot of the dialogue now feels like it was written by a fan of the show trying their best to make things as uncomfortable as humanly possible as much as possible. We’ve lost the realism that directly fueled the comedy and made everything that David said and did that much more cringeworthy & consequential.

We get it, Larry is always saying and doing the wrong thing, but in the past it felt a bit like we were watching a real guy navigate through the real world. This season follows, in my opinion, a once brilliant formula a bit too by the numbers. In the past we’d never quite know when or why the shit was gonna hit the fan. Perhaps they’ve run out of ideas or perhaps now the landscape of things even in six years have changed so drastically that Larry’s just not relevant in the way he used to be. Whatever the case I had to make a quick rant, I still find aspects of the funny don’t get me wrong, this was one of my favorite comedies of all time, I’m gonna finish the season but dang do I miss Larry’s glory days…what do you think?

The Benefits of Gusbandry dropped it’s second episode yesterday online and the plot begins to thicken quite a bit! I really enjoyed the first episode which I was lucky enough to catch at the Portland Film Festival in September and I’ve been waiting for the second to really kickstart the whole “gusband” thing into gear. A “gusband” fyi is a gay husband but you won’t find much in the way of romance in the second episode, at least involving the main character Jackie. It’s no secret that she’s clearly crushed out on the wrong dude.

Just when she thinks she’s finally found her Mr. Right we get to watch it all awkwardly come tumbling down. That’s not say it doesn’t happen without some laughs. Still, I’m already hoping that somewhere in this series Jackie’s “Mr. Right” will eventually pop up, though I fear for her the journey won’t be an easy one! This episode really sets up the premise of the series and by the end of it you’ll be wondering where it’ll go next or should I say just how far it will go. It’s playing out so far a bit like Will & Grace if it would’ve been aired in 2015 on HBO and that’s a damn good thing. I’ve got a feeling things are bound to get pretty wild & crazy along the way. I’m curious to see where the wind blows our two main characters and if for some reason neither of them find the love they’ve always hoped for, well at least they’ve got each other…

if you missed the first episode here it is:

Even better now you can watch the second one right after:

This last Friday I attended the Portland Film Festival late night short film block and saw a ton of great lil’ flicks! One of my favorites of the batch was “The Benefits of Gusbandry” which made it’s premiere that very night. This short film is actually part of a much bigger series that launched today online several places. What you might ask exactly is gusbandry? Short and simple, combine two words “gay + husband” and voila and you got a gusband, but in this unique case it’s much more than that. I don’t wanna give away too much of first episode’s plot, so I’ll leave it at that for the moment.

The first episode though was shot right here in Portland, Oregon, directed and written by fellow Portlander Alicia Rose. She’s been responsible for some of the coolest music videos of the last decade for the likes of Bob Mould, MC Frontalot & The Corin Tucker Band to name a few. This project however will have a longer life of its own as we’ll get eight episodes – one each month and hopefully more to follow in a second season. You’ll not only get an awesome tour of typical Portland life in the series but it seems you’ll get it jam packed with some great offbeat comedy with a heart of gold. Check this cool new debut episode which is sure to teach us a few valuable lessons about getting older and trying to find your “Mr. Right” in a these confusing modern times…

Last night I had the pleasure of attending the Portland Film Festival’s late night short film series! It was jam packed with great flicks from all over the place and was filled with blossoming talents! One of my favorite portions of the night was seeing the first short film called “Never Cool” which is just under two minutes in length and a total riot! Take a minute to check this one out as Billy Dee Williams narrates and lets you know the top things in life that you will NEVER look cool doing! It’s something we can all relate too!! Hilarious…

l don’t do a ton of music posts here so when I do you know it’s something special that’s worth checking out! I had to take a minute to mention that a little over a month ago I worked on the latest music video from Bob Mould. I was lucky enough to work on the styling and wardrobe for one of my musical idols, being a fan since his days in Husker Du this obviously meant a great deal to me not to mention this new song “I Don’t Know You Anymore” I consider to be one of the best songs he’s ever written. It calls back to some of his best work from Sugar, his band from the early 90’s.

If you don’t know who Bob is and you love loud punky guitar rock, you may have at least heard him on the last Foo Fighters album where he and Dave Grohl dueted on guitar, vox and songwriting for the albums best track “Dear Rosemary”. Otherwise I highly suggest checking out his his work starting with Husker Du. This latest video was filmed right here in Portland Oregon and directed by Alicia Rose, who we worked with on several other projects together including Corin Tucker’s video for “Neskowin”. 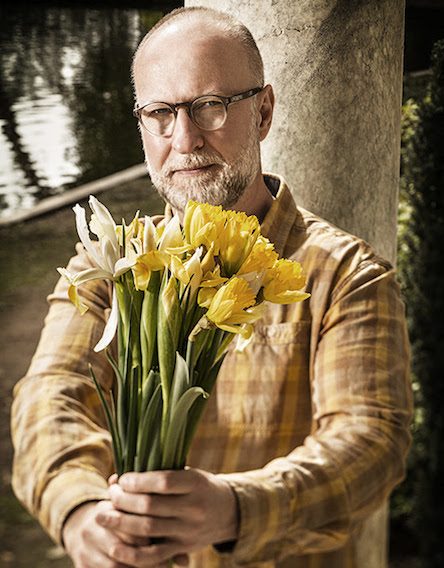 I can tell you the latest Mould video is pretty damn funny too as Bob and his band tries to “get with the times” after releasing a vinyl single for the bands latest track and being schooled by Colin Meloy from The Decemberists. I also got his new album “Beauty and Ruin” which was released on Merge Records yesterday and it’s rock solid with jam packed with amazing guitar driven power pop. This guy just gets better with age- if you have any doubt check out the video already!!!

So yeah I am going to take a minute to brag a little bit here about living in Portland Oregon. To a Star Trek fan August is the time to be here, no not for the beautiful weather but for “Trek in the Park”! Yeah that’s when you can can go every Saturday & Sunday to Cathedral Park in North Portland to witness a live Star Trek episode re-enacted before your very eyes in full costume! For FREE! 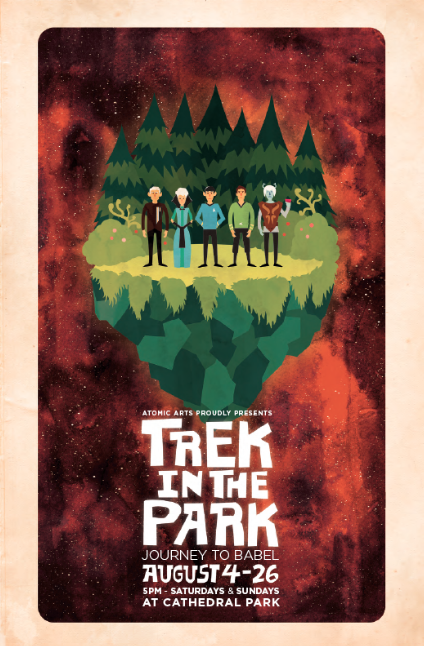 This has become somewhat of a Portland tradition over the years and it’s grown more popular every year. This year it moves to an even bigger location with an ampitheater. Some feel this could make the show less intimate than previous years. Either way it’s going to be a lot of fun.

“Returning this year is the long-standing and talented crew of actors that fans have grown to love, including Adam Rosko as James T. Kirk (and director of the show) and Jesse Graff as Mr. Spock. But this year, they will be joined by a cadre of Portland’s most gifted artists, writers and performers including Kaebel Hashitani of Sequential Arts (sequentialartgallery.com) and the pirates of PDXYar (pdxyar.org) portraying some rabble-rousing Andorians and Tellurites. In the roles of Mr. Spock’s parents, Atomic Arts is quite pleased to welcome the husband and wife team of Paul Guinan and Anina Bennet (bigredhair.com), adept multimedia artists best known for their work on the handsomely-designed Boilerplate and Frank Reade: Adventures in the Age of Invention.” Hey this years episode “Journey to Babel” is a true classic and if you live here in PDX you best be in attendance.
Get more info here!