It tells the story of three beautiful sex obsessed fairies who’s live in solitude out in the forest. They all take an interest in a young, handsome scholar who moves into the woods nearby in a cozy little cabin. Curiosity soon gets the best of them and each one decides to make a visit to meet this sexy studious stud in his messy book infested cottage.

Things get pretty gosh darn sexy and the fairies soon discover that each of them has “gotten down and dirty” with the guy causing some hefty drama between them to go down. But their jealousy is really the least of their worries as soon they all find themselves growing thick hair on their chests! What a bummer! They seek help from a local magic priest to help cure themselves of whatever supernatural STD they managed to all catch from the guy but find that it’s up to them to face him one final time with their own special powers and try to destroy the horny beast.

I really wasn’t sure what to expect going into this one, I’d figured it was just going to be some guy getting it on with three sexy ghosts. But to my delight this one delivered that and THEN some. It’s really no wonder that Lam Nai-Choi couldn’t resist throwing some wild shenanigans and a three headed demon into the mix! There’s clearly an over abundance of sex on display as the guy gets lucky more than anyone has any real right to with three beautiful women, it’s just too bad for all involved that he was literally such a wild and crazy sex freak. I guess this softcore would be sort of a genre mash up, a wuxia (chinese fantasy), sex-filled, horror creature feature. 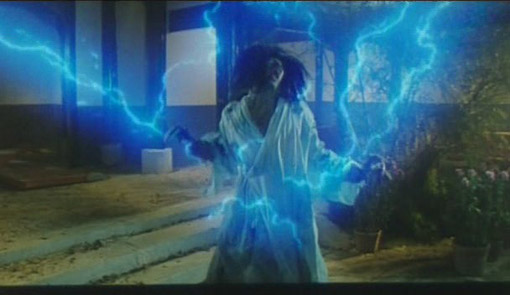 It gets a lot sexier than most softcore movies I’ve ever seen, but the true charm of it all is that the director took a stab at a odd choice of a genre movie and added his bizarre trademark bonkers touch to the whole damn thing. If you dig his other work like Riki-Oh , The Seventh Curse or The Cat you’re going to want to track this one down as well for sure for the sheer absurd spectacle of it all….