One of the things I really enjoyed about ‘Avengers: Endgame’ was the “Professor” Hulk finally making his big screen appearance. I’ve gotta admit I was a bit disappointed that this version of the Hulk really didn’t do any smashing and even more of a let down was that we never got to see Hulk and Thanos get a rematch. Just because the Hulk’s got Banner in the brain doesn’t mean he still can’t kick some major ass! Regardless it brought back memories of the character as a kid when “Banner Hulk” was introduced and for me it was shocking to see the character this way. Incredible Hulk #285 was always a favorite of mine, where we really see Banner Hulk in full effect.

I mean the cover and the first page feature Hulk with his classic Banner attire and even some sweet ass combed hair!! Back in 1983 I was in awe that this could even ever be a thing for Hulk, the character during this period feels a lot like the ‘Endgame’ Banner Hulk, where he was a lot more reserved about doing any serious ass kickin’. Later in the 90’s we got Professor Hulk yet again, though he was much more of a bad ass often using guns instead of fists to fight his enemies. Still this great cover is a total classic from artist Ron Wilson and inker Joe Sinnot and of course who doesn’t love a classic showdown with one of his greatest villains-ZZZAX!!! Check out the first page of this issue, it’s one of my all time favorite depictions of the Professor Banner Hulk! He never looked so damn smart and sophisticated!! 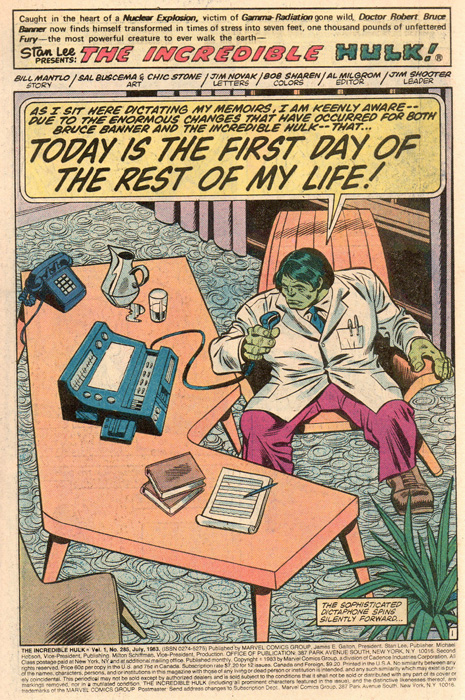 Rob Liefeld has now responded to Peter David’s recent development that former New Mutants and X-Force character, Shatterstar, is gay. Shatterstar, as mentioned in a previous Universaldork post, shared the first male-male kiss in mainstream comics recently. Rob Liefeld does not like this one bit, check out what he has to say:

“As the guy that created, designed and wrote his first dozen appearances, Shatterstar is not gay. Sorry. Can’t wait to someday undo this. Seems totally contrived.”

“Your opinion doesn’t change the fact that it sucks and it’s not a positive move in most fans’ eyes. And it’s all well and fine that you don’t respect a creator’s wishes or intent. I’m different like that.”

“Shatterstar is akin to Maximus in gladiator. He’s a warrior, a Spartan, and not a gay one.

“… I have nothing against gays, I have gay family, nuthin’ but love here,” he wrote on his message board. “Ditto gay characters if that’s what their true origins are.

As of this blog, Liefeld has not commented on his feelings towards Peter David’s exclusion of Shatterstar’s gratuitous ponytails or diagonal sword hilts, in his current X-Factor run.