I thought I’d share this new Mister Saturday track just posted up to Youtube yesterday. Yeah I know you’re still wondering who in the hell Mister Saturday is? Well in short it’s me. I started this little project years ago, where I’d take dancehall and instrumental hip hop tracks and rapping or DJ-ing (as it’s referred to in Jamaican culture) over them. I became a big fan of reggae dancehall when I was just a kid and always wanted to hear songs about stuff that I liked, like say The Incredible Hulk, Star Trek and Dungeons & Dragons. That stuff though isn’t real big in Jamaica so I decided what the hell, I’ll make my own songs about that stuff! Somebody had to do it. So I did it, and songs like the one below are the result. Nerdcore reggae dancehall.

I figured if MC Frontalot could invent nerdcore hip hop, then I could invent it’s reggae rappin’ counterpart. This track was an instrumental from 1985 called “Land of Rhythm” by Sly and Robbie the legendary riddim twins. I always thought it deserved some vocals so I added them, get out your break dancing attire, grab a spliff and boogie down! Subscribe to my Youtube channel to as I’m always adding more songs and vids! Been working on a live show with my partner in crime Ensly Mogul who also has been makin some wicked beats & riddims, now all I gotta do is get Frontalot or MC Chris to take me on tour with them!

Lyrics:
“The Land of the Long Lost Riddim”
END_OF_DOCUMENT_TOKEN_TO_BE_REPLACED

So I could go on on on and on about all the multi million dollar movies out there and hype them up even more, or talk mad shit on them til the cows come home-but really do they need anymore people promoting their shit for them? I think not. Instead though I am going to hype up my new song I wrote with Ensly Mogul my spacehall nerdcore partner in crime. In fact he was an original contributor here on Universal Dork and from time to time used to post here. I have been releasing nerdcore dance hall for years and just recently started up writing new jams and rehearsing with Mogul for live shows. 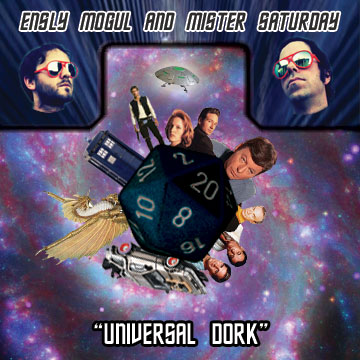 Anyway we just recently put the finishing touches on this one, which is a nerdcore mix of hip hop, reggae spacehall bursting with dork rhymes galore. This is the second track we’ve released and it will be part of our upcoming full length album – dorks unite and please help us spread the word and let us know what you think so far!

Nerdcore Rising is a new documentary that will be released on dvd tomorrow (Sept. 15th)  and has appearances from Brian Posehn, Jello Biafra and Weird Al. The film follows Frontalot on his first national tour. Check this out if you’re a nerd and wanna hear some rappin’ that you can really relate to….