I checked out ‘X-Men: Apocalypse’ today, a movie I was super excited for as I was a huge fan of ‘Days of Future Past’ and the other Singer X-Men movies. I’m sorry to say that for some reason this latest installment is a big bloated mess that sadly misses the mark by a boatload. I loved that the last movie was set in the 1970’s & was so stoked on the idea of this one taking place in the 1980’s. However, aside from some cool vintage wardrobe and a Ms. Pac-man video game there wasn’t much else in this one that for me really brought me back to that great era of the X-Men comic books.

There was simply just too many damn characters running around, the story was missing heart and the special effects were just too much of a cartoony CG mess to convince me that the Earth was in any serious danger. I had high hopes forthe movies antagonist Apocalypse too and didn’t even mind his look, which most people were in a frenzy about from the start. However, Apocalypse as a villain was just way too hokey to be taken seriously and yeah he really did look a bit ridiculous I must admit.

And Talk about a villain who takes himself way too seriously, jeez, he seemed more like an overdramatic cartoon version of the legendary villain. We’re really not given that much character development here for anyone, everything that happens happens way too coincidentally including the origin of people’s hairstyles! It seems Apocalypse is not only responsible for huge amounts of global chaos but also for Storm’s white hair & ALSO Professor X’s bald ass head!! END_OF_DOCUMENT_TOKEN_TO_BE_REPLACED

This new pic released as concept art for Bryan Singer’s X-men: Age of Apocalypse has got me pretty damn excited. It clearly shows that this “final” installment of the movie franchise will feature once again The Angel, (Warren Worthington III) making an appearance on the big screen! Unfortunately we got a pretty flimsy version of the iconic X-man in Ratner’s X-men in 2006, that’s not to say the casting wasn’t pitch perfect with Ben Foster in the role. It really featured him in a bit role as an easily forgettable part of the critically un-acclaimed movie. So now we’ve possibly got Ben Hardy being cast as that same character in the upcoming movie and really that can mean only one thing. Apocalypse and The Angel on the sliver screen together=Archangel. Check out this pic released yesterday…

So in the pic it looks like Warren is on display, caged in some sort of auditorium. People think this might be some sort of traveling carnival, or an alternate dimension but I think it’s Angel perhaps held captive by some anti-mutant group before they “clip his wings” for show. It also reminds me of  an image of Warren when his wings were taken from him viciously by The Marauders during the Mutant Massacre storyline(one of the best), however in the above concept picture it’s not clear if his wings have been impaled.

To me it was a sad day back in the 1980’s for The Angel when this happened and the loss of his wings ultimately lead to him “committing suicide” by crashing a plane he was piloting. We all know though he was far from dead and the next chapter for the character was perhaps the most compelling. Apocalypse saved him from his suicide and turned him into a blue skinned killing machine with razor sharp metal wings. No longer was Warren the blonde pretty boy, now he was a deadly character that could go one on one with the likes of Wolverine and Sabretooth. Archangel is easily one of my favorite Marvel characters of all time but over time they decided to transform him back into the his original form with the feather wings.

We however in the past few years saw the Archangel persona return and join X-Force where he lead the team to murder the resurrected incarnation of Apocalypse as a young boy. So I can say with certainty that we are going to see Archangel on the big screen because lets face it to include Warren Worthington and Apocalypse in the same flick and not follow this story line would be a crime! Don’t screw this up Singer!!!

I have done several posts here about how the “old dog” comic artists need to come back and show the young’ins how it’s done. I have ranted about John Byrne, Mike Zeck, Barry Windsor Smith and Walt Simonson. Well I guess I am going to eat my words here as I just couldn’t hold it in anymore. Walt Simonson’s latest artwork well kinda….SUCKS. There I said it. It’s out there on the table. I was initially thrilled to find out that him and Bendis were teaming up for the latest running arc of The Avengers but upon initially seeing the artwork I was stunned at just how terrible his skills have gotten over the years. So what gives? Did he just forget how to draw? Was he rushed and didn’t give a shit? Or am I crazy and maybe he always sucked? Lets take a closer look…

New Simonson 2012 (these are random images I found online, perhaps I can scan some soon that may really get my point across, however if you are reading Avengers currently you know what I mean) : 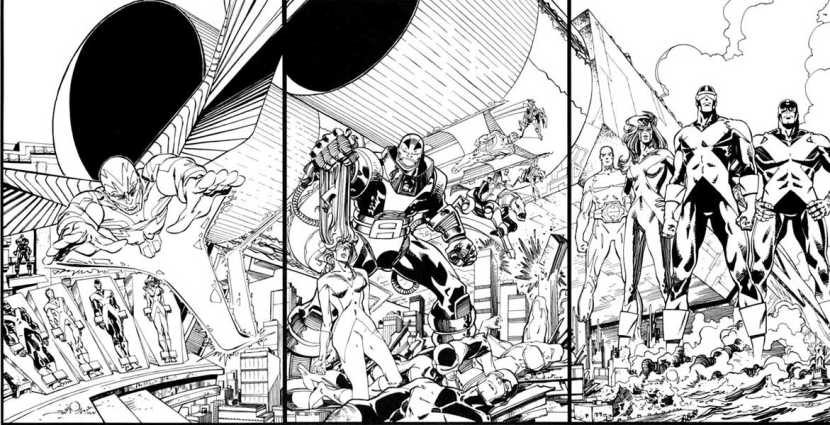 Well Walt all I ask is that you put a little more effort into it dude! It’s clear you got the skills still, maybe you don’t think you need to prove anything? Well I’ll be watching closely for a return to form

Remember when The X-Men were really bad ass? Back in the 80’s they sure seemed that way-with Storm sporting her mohawk and Wolverine tokin’ on a cig reciting Clint Eastwood lines on their beautifully drawn John Romita Jr. covers. Man those were the days I tell ya! This amazing cover is taken from the “Mutant Massacre” storyline that ripped out the souls of their readers back in the 80’s. The same storyline that took Angel’s wings away from him and introduced Sabretooth as one of the most frightening villains the X-men and Wolverine would then continually face off with. Anyway John Romita Jr. was putting out some of his best artwork ever back then and this cover is a reason why to this day he’s still in the lime light as one of the best in the industry!