It seems our ol’ pal Ash Williams might be in need of our help, Season 3 of ‘Ash vs. Evil Dead’ just recently kicked off & it seems there’s a serious possibility that the show may not be renewed for ‘Season 4’ by Starz. The show is one of the most pirated out there meaning all of us Evil Dead fans haven’t really been supporting the return of Bruce Campbell in the way he’d hoped we would. I’m fully up to date having just finished watching the most current episode of season 3. I’ve at the moment got a free 7 day trial for Starz, that’ll be over in a couple days and I’m planning on getting a membership at least for a month to watch the rest of the show. I figure $8.99 is way more than worth it for rest of the season,  besides I spend more than that to see a movie at the theaters usually for a movie that wasn’t that all that good. So if you’re a real fan of the ‘Evil Dead’ franchise it just might be time to show up for real, cough up 9 bux and support Ash in his quest to stomp out evil! 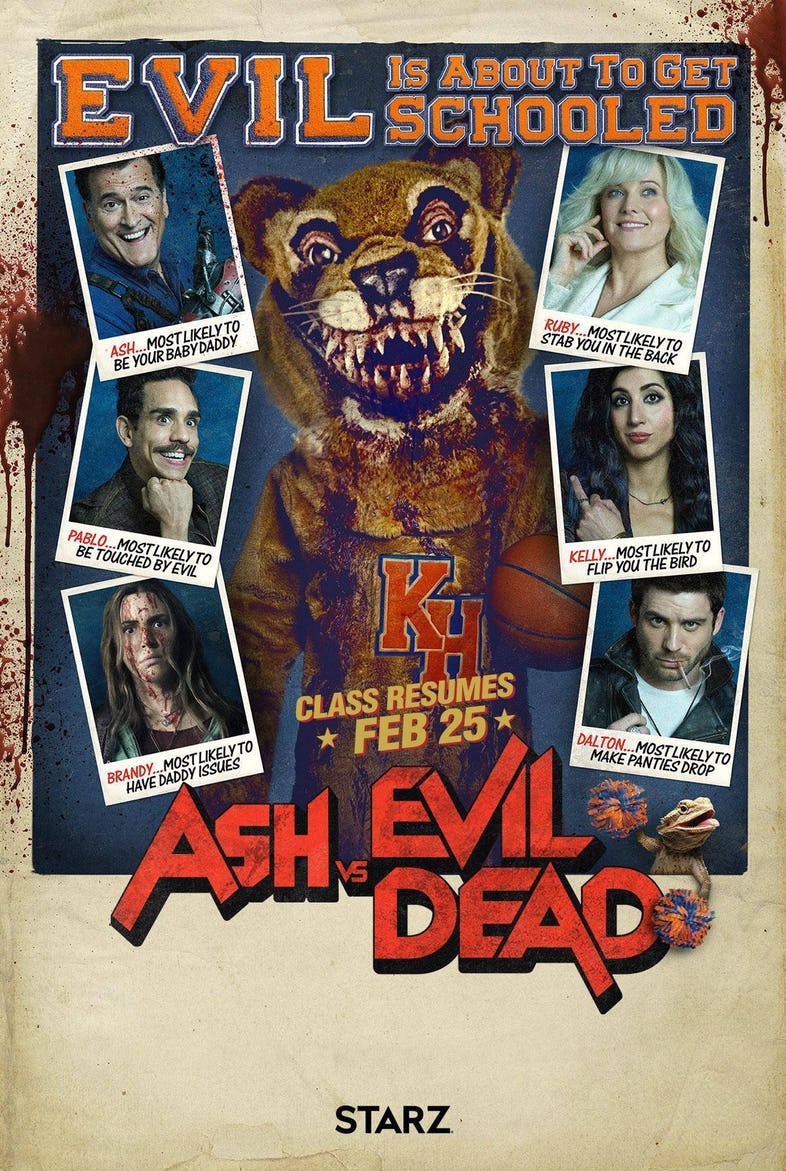 Now onto season 3 thus far, upon watching the first episode, it felt a bit too familiar to season 2, Ash is now the hero of his small home town, everything seems to be peachy for him again and his companions (starting off a bit too much like the “Jacksonville paradise” season 2 first episode). Of course the Necronomicon appears again, someone recites it’s passages and ‘Deadites’ are back raising hell for the small quaint town. My only initial gripe was that we’re spending yet another season in Ash’s hometown, at least for now & I’d really have liked for Ash and his crew to have been sucked into another time warp similar to ‘Army of Darkness’ to really mix things up. However it was apparent my small gripe would soon be totally erased by just how bat shit crazy and fun everything quickly escalated to. So far season three just might be the best of them all, every episode delivers the wild and crazy gore, monsters & special fx fans have been clamoring for all these years. END_OF_DOCUMENT_TOKEN_TO_BE_REPLACED

I checked out the first episode last night of season two of Ash vs Evil Dead that’s streaming for FREE on Starz website. I’ve gotta say I think this episode might be one of the best ones thus far in the whole series. I really enjoyed season one, it did exactly what it set out to do which was bring us a fully over the top adventure featuring everyone’s favorite iconic cult horror anti-hero Ash. Did it have it’s flaws? Certainly. Some of the FX work relied too much on some questionable CG and at times there were a couple episodes that were just a little bit flat. Overall though, it packed the punch it promised and it was truly incredible to finally see Bruce back in the role. I gotta say I really never thought it would actually happen.

So season two comes around and part of me wonders if this whole formula will grow tired? Well the first episode did NOT disappoint! I couldn’t help but smile during it, Bruce is just so damn lovable and his two sidekicks have definitely grown on me, In fact someday I could see these two continue on the Evil Dead franchise without Bruce if he someday decided to hang up the chainsaw. I also loved the opening, having lived in Jacksonville Florida myself, the whole idea that THAT city is Ash’s personal view of paradise makes the idea that much more comedically potent.

I’m totally diggin’ where the show is going and we get to meet Ash’s very non PC dad (Lee Majors) which is a total treat. I do wish they’d have stayed a bit longer in Jacksonville, but I love how we’re getting some of Ash’s backstory in his home town in Michigan. What really do we know about the character otherwise? This begins to really flesh him out. Also someone must have been listening to fans reaction to the CG FX because the season two debut is almost entirely done with gory ass practical effects. It really looks great and feels more like the original movies than any of the other episodes. Well done. This show is pretty damn awesome and it’s the perfect thing to get you into a good mood if you’re feeling blue. I’ve just gotta catch this season weekly, it really is a show that makes me smile. In the meantime I’m going to watch this episode again, yeah it’s that good…

Here’s the teaser for the next episode: