What’s there to be afraid of in a little lake out in the woods? Beavers? Muskies? Snapping Turtles maybe? Well “Beneath”, which was just released on dvd this last week brings some horror to the little fresh water lakes of the United States! I really enjoyed this little creature feature directed by Larry Fessenden, it’s got a lot more going on that just a vicious fish. The story revolves around a group of recent high school graduates as they head off for a night to camp and party down on some land one of their families have access to. It seems from the start there’s more than meets the eye a foot as it’s clear one of the teenagers has some sort of knowledge that the lake they are headed to has something beneath the surface that’s to be feared. 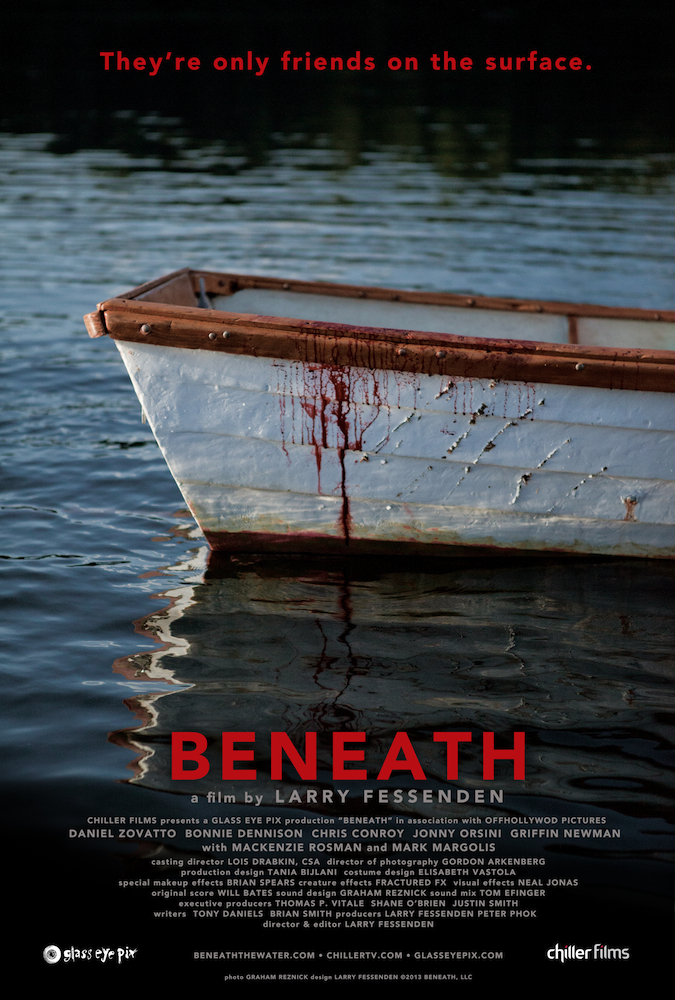 So we end up with six teens in a rowboat headed across the a small lake in the middle of the woods. The trip across turns into a fight for survival, not only from a vicious man sized fresh water fish but also against each other. That’s where the film gets really interesting, after their boat is damaged and begins sinking it seems it’s everyone for themselves. I enjoyed this also because it’s setting reminded me a lot of places where I grew up in Wisconsin in the north woods and would spend summers. This ones got a few nice twists and turns too and makes you question just how you might deal with something similar.

The monster was also well done, with no CG, which helped make this little film feel all that much more real. The fish actually looked like something that might even possibly exist in some small lake in the middle of nowhere. Like some kinda freak giant catfish or something. Using digital effects here may have really ruined the mood and realism of the situation. The fish actually moves and acts like a real fish, it’s not lightning fast it’s just a giant fresh water fish! So props to Fessenden for keeping it old school while also keeping the atmosphere nice and creepy. Something he’s a master of. So check this out, it may not be the next Jaws, but it feels all too real in the same way!