I’ve been picking up a ton of VHS while out on the town doing while doing vintage shopping for my business here in Portland Oregon, that means that I’m watching a ton of awesome old flicks that have been somehow lost in the shuffle for years, at least for me! So the other night I decided to put on an interesting looking one called “If Looks Could Kill” way back from 1991, starring none other than fan fave from 21 Jumpstreet (the original series yo!) Richard “Booker” Grieco! Ol’ Grieco was destined for stardom when he exploded onto Jumpstreet & briefly rivaled Johnny Depp as the series heart throb. So Grieco quickly got some offers to make some movies-some bad and some good in a bad way. This particular film is pretty awesome, directed by William Dear hot off the success of the brilliant “Harry and The Hendersons”. 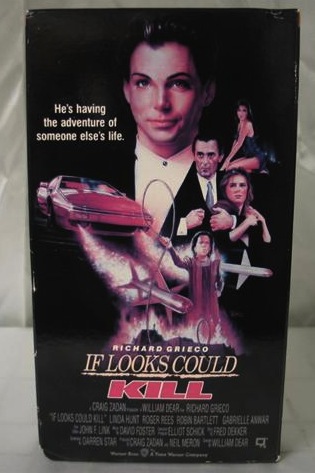 What we get here is a great obnoxious teen comedy (which I’m a big fan of, well, since I myself was a teen!) with a heavy dose of James Bond & equal parts Indiana Jones! What’s not to love there?! Dear clearly had a budget for this box office flop and it shows as it rarely skimps on cool set pieces and rather impressive action sequences. The flick was panned by critics, but like me, Roger Ebert got it and awarded the film 3 out of 4 stars. The plot’s simple, Grieco is a high school student flunking out of his french class while too busy boozin’ it up and slackin’ off. Now before I continue I have to ad that Grieco is clearly no teenager, nope- he’s got a serious dark ass five o’clock shadow the entire movie and the body of an olympic athlete, truth be told that in 1991 he was nearly 2y years old, though to me he looks more like 37!

Anyway because he flunks French he’s forced to…get this….go France for summer school!! Boo hoo what a life huh? Fail and get a free trip to France? Yeah right!! So that’s where things get crazy, as he’s quickly mistaken for a secret agent bearing the same name as his and begins an adventure of his own! Mistaken identity never felt so good. He’s almost tempted to reveal that he’s simply a high school student until the British Gov’t gives him a Ferrari to roll around in, so then at that point he decides it’s totally like worth playing along! Duh!

This begins a zany chain of events that involves Grieco playing his teenage luck with deadly sexy secret agent ladies, explosive chewing gum, wall walkin’ suction cup LA Gear sneakers, killer scorpions and a dastardly villain with a robotic Terminator style hand. It’s pure camp gold and a entertains with quite an impressive finale with Grieco trapped in an Indiana Jones style deadly villain castle hide out! So if you’re looking for a fun flick to watch with friends and a few beers check this one out-it should have made ol’ Grieco a star like Depp! Oh well!!