We all know that H.P. Lovecraft stories can be hard to translate to the big screen, but when I heard Richard Stanley was making his cinematic return with ‘Color Out of Space’ I was pretty damn excited to say the least. Stanley may not have the longest resume when it come to feature film but what he has done is pretty damn amazing. Both Hardware (1990) & DustDevil (1992) are lesser known horror gems & with ‘Color Out of Space’ it’s a complete and total return to form. Stanley also brings Nicolas Cage along for the ride, which after his fan fave performance in ‘Mandy’ has kinda given Cage his second coming as an even more beloved cinematic presence. Much like ‘Mandy’ there’s plenty of bizarre psychedelic imagery here to go around and a ton of visceral horror sequences that I guarantee will shock you.

Stanley seems to love a slow burn horror story and brings that approach once again, leaving us all with a twisted but beautiful spectacle to behold by the film’s final act. The story here is simple, one quiet evening an eerie glowing meteorite lands in the front yard of Nathan Gardner and his family’s Alpaca farm. They soon find themselves baffled by it’s effect on the plants & wildlife on property as well as their own suddenly strange behaviors. Soon it’s clear, a mutant extraterrestrial organism that infects their minds and bodies is roaming the woods at night & transforms their quiet rural life into the ultimate technicolor nightmare. END_OF_DOCUMENT_TOKEN_TO_BE_REPLACED

I was lucky enough to be able to check out the latest 1980’s throwback monster movie ‘The Void’ at the Hollywood Theater here in Portland Oregon last night. I’m pretty fucking stoked that I’m so close to one of the coolest theaters in the country that’s constantly giving us here alternatives to the huge Hollywood blockbusters continuously cranked out. If you’re ever in Portland I highly suggest checking out this place as it always has several incredibly unique events and movies happening there. But I digress, The Void was definitely a thrill to see on the big screen!

I’ve been waiting for this one for quite a while and right now it’s showing all across the country at select theaters. If you’re a fan of classic 1980’s horror flicks like ‘The Thing’, ‘Reanimator’ & ‘Hellraiser’ you’re in for quite a treat. ‘The Void’ captures the look and feel of films like these with ease, similarly creating an incredibly unsettling sense of dread throughout. Seeing it at the particular venue I did intensified the experience, along with the fact I smoked some pot (hey it’s legal here now so get off my back!) before and I felt a little bit like I was transported back to simpler times when horror flicks were at the peak of their charm. It’s story is pretty simple at it’s surface, taking place almost entirely inside a lonely hospital during a graveyard shift. We meet a group of people whose quiet night soon becomes a descent into total madness as the hospital becomes surrounded by a weird ass masked cult dressed in white robes with black triangles displayed upon their hoods. END_OF_DOCUMENT_TOKEN_TO_BE_REPLACED

Holy shit! I had the pleasure of seeing a screening last night of one of the most insane flicks I’ve ever seen at the Hollywood Theater right here in good ol’ Portland, Oregon! Yep “Roar” from 1981 has been called the most dangerous film ever made. This is hardly an exaggeration- It took about five years to make. It’s story revolves around Tippi Hedren and Noel Marshall, (writer, director, actor in the film)  along with Hedren’s real-life daughter Melanie Griffith and Marshall’s real-life sons John and Jerry. 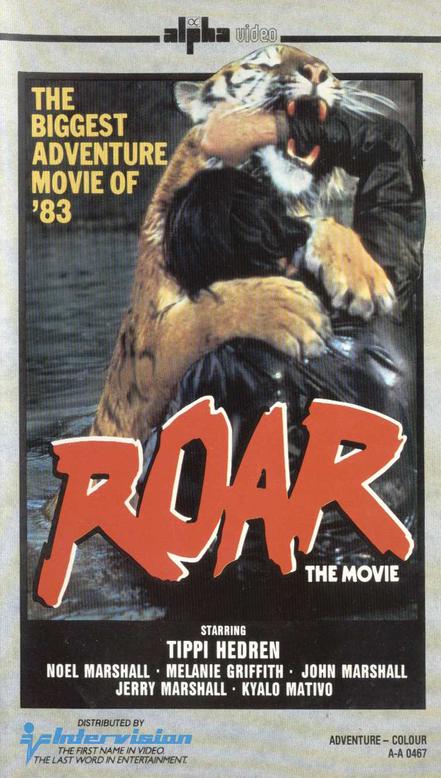 Oh yeah and it also stars their real life adopted family of over 100 dangerous lions, tigers, panthers and cheetahs!! This movie is seriously insane, and had me cringing in fear around every corner as Noel Marshall is surrounded by these giant cats for nearly the entire movie. The plot is simple Marshall lives in Africa in a Swiss Family Robinson style house along with all of these man eating cats and a giant pissed off African elephant. The rest of his family (like in real life, Tippi in the movie, is his wife though they’re separated in the film) decide to drop by unexpectedly, only problem is dad isn’t there when they arrive….but the CATS are!

This movie is utter mayhem, filmed with just a loose plot, most all of the one million feet of footage shot depended on what the cats decided to do while shooting. These cats in the movie are considered Marshall’s harmless buddies, though he’s tackled, smothered and in the middle of raging giant cat fights pretty much nonstop throughout the film. To see these actors deliver their lines while in the midst of these beasts is quite a hilarious feat to say the least! 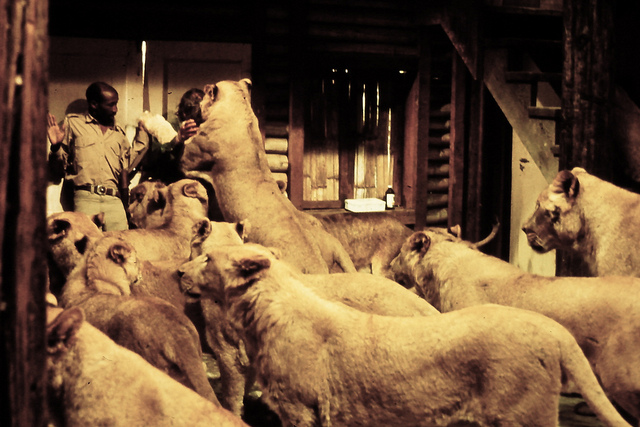 Now onto the other crazy fact of this film, no animals were harmed in the filming but over 70 cast and crew members were!! Much of the injury can be seen on film, though carefully edited. Here’s a list of exactly what when down via the Wiki page:

“Cinematographer Jan de Bont had his scalp lifted by a lion, resulting in 220 stitches. Tippi Hedren received a fractured leg and also had scalp wounds. This occurred after an elephant bucked her off its back while she was riding it. She was also bitten in the neck by a lion and required 38 stitches. This incident can also be seen in the film. Melanie Griffith(Hedren’s daughter) was also attacked, receiving 50 stitches to her face; it was feared she may lose an eye but in the end the wound was not disfiguring.

Noel was attacked so many times that he eventually was diagnosed with gangrene. One of those incidents, he was clawed by a cheetah when protecting the animals during a bushfire that occurred in 1979. All animals were evacuated, though it took several years for him to recover from his injuries. Due to the injuries, turnover was high as many did not want to return to the set. Some of the lions also suffered from illnesses that reduced their population. John Marshall was bitten by one of the lions and required 56 stitches. His brother Jerry was bitten in the foot while wearing tennis shoes. He later jokingly said the lion had a “tennis shoe fetish.” Assistant Director Doron Kauper had his throat bitten open, his jaw was bitten, and one of the lions attempted to rip an ear off. He was also injured in the head, chest, and thigh. Although it has been reported that the attack nearly proved fatal, the Santa Cruz Sentinel on July 9, 1978 printed a quote from a nurse saying his injuries were acute. He was also reported as being conscious and in a fair condition.“

Sound pretty unbelievable huh? Well after watching this movie, which was never officially released in the US until now it’s pretty clear how the insane list of injuries is totally accurate with what you witness before you! There’s a ton of crazy stunts and an angry elephant scene that will scare the pants off of you! The cats were adopted by Hendren and Marshall from defunct circuses, zoos & irresponsible owners and given refuge at The Shambala Preserve  just about 50 miles outside of Los Angeles which they started together. in fact you can still visit the preserve today. Before you do though make sure you do not miss this movie it’s a truly incredible piece of cinema and one experience you’re likely to never forget!

I am thoroughly bummed out that “Lessons Learned“, the short film by Toby Froud somehow slipped through my radar here undetected! Being a huge fan of Both Labyrinth & The Dark Crystal this film is on my must see list and Mr. Froud I find also lives right here in Portland, Oregon! Now that’s not even the most interesting part, Toby is kind of a legendary guy, his parents created the puppets and landscapes of The Dark Crystal & Labyrinth, but get this, he also starred in Labyrinth as the legendary baby that David Bowie kidnaps!!

So these days he lives in Pdx and works on puppets at Laika Studios on movies like Paranorman and the upcoming Box Trolls.  Most recently however he’s completed his epic puppet short film, “Lessons Learned”, which was funded on Kickstarter. Now the film is complete and screenings are popping up. The movie looks pretty awesome & it really looks like it takes place in the same universe as The Dark Crystal!

So check out this trailer for the film which he teamed with Heather Henson (Jim Henson’s Daughter)! I think if he could follow this up with a feature length film, in the same vein it would excite legions of people all over the world. Lessons Learned will screen again as part of the Portland Film Festival in August. For those not in Portland, it has been selected as part of FilmQuest in Salt Lake in July, and will possibly play at festivals elsewhere pending acceptance.