‘Hiruko The Goblin’ from 1990 has got to be one of the best horror movies from Japan I’ve ever seen. It hits all the right beats for me in what I personally love from the late 80’s early 90’s genre movies. Directed by the iconic Shinya Tsukamoto, most well known for his epic, bizarre cyber punk horror oddity ‘Tetsuo: the Iron Man’ he delivers another slam dunk here a couple years after with this. However, this particular movie of his has gotten a lot of criticism for being so totally different from ‘Tetsuo’. Haruko spends more time on character development, humor and over the top monsters, as well as a heavy dose of heart. For me this is a much better formula than the grimy bleak mood of most of this directors other work. 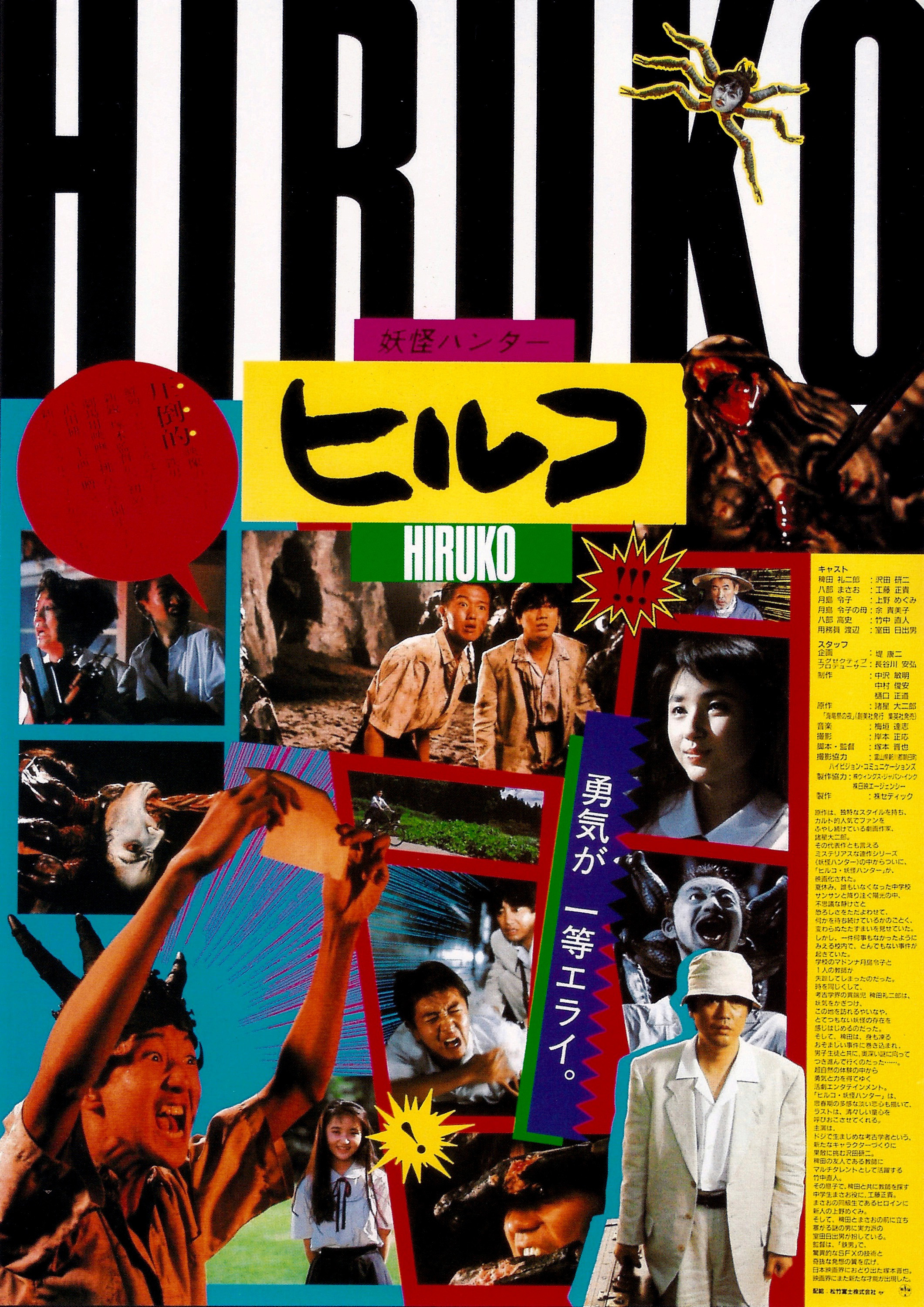 This plays out way more like ‘Evil Dead 2’ meets ‘The Ghostbusters’ then his cyberpunk Cronenbergian/ David Lynch tinged outings. The story is simple yet truly bizarre: a school has literally been built on a gate to Hell behind which hordes of demons await the moment they will be freed to wreak havoc on the physical plane. Hiruko is a powerful and cunning creature sent to Earth on a reconnaissance mission, he decapitates humans in order to assemble their heads on demonic spider like bodies and command them to do his wicked deeds. Eventually this gory predicament falls into the lap of an archaeology professor, who’s dramn to the abandoned school during summer time to investigate the supernatural shenanigans and stop this demonic onslaught. 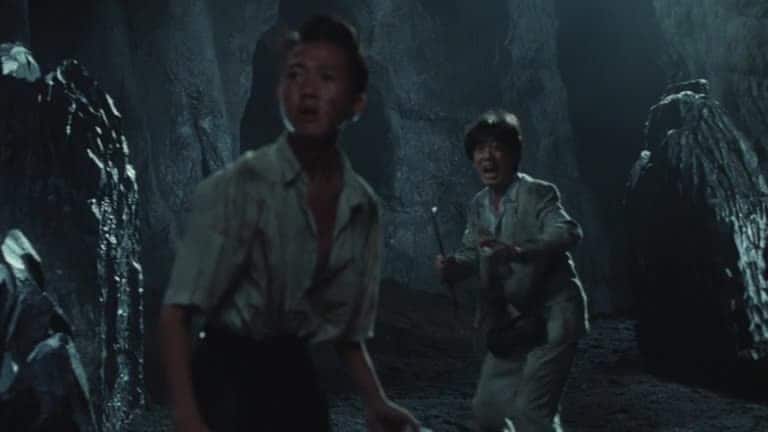 One of my favorite aspects of this movie are the two protagonists a teenage high school student and his odd demon-lore obsessed archeologist uncle. When the boy’s father goes missing while exploring the caverns beneath the school, his eccentric uncle arrives on the scene to help him search the school armed with some nifty demon busting equiptment. From here it leads them on an epic surreal journey facing off with creatures in the creepy empty corridors of the school. It also explores family dynamics, all with a slightly light-hearted comedic edge to it amidst the mayhem. 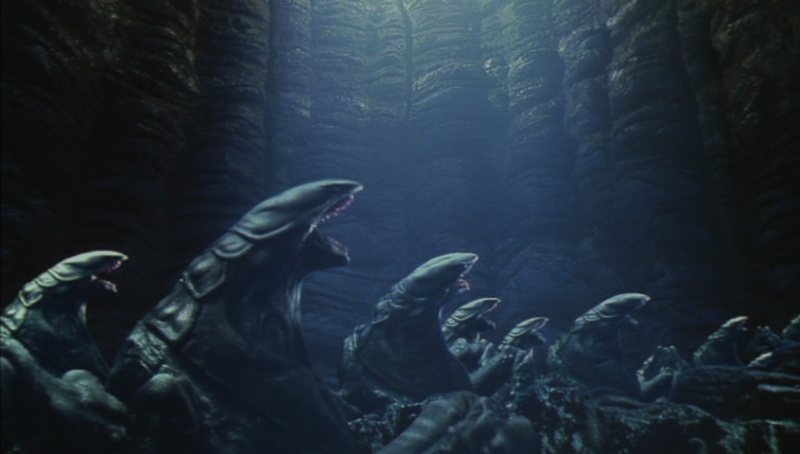 The other big star of the show here is most definitely the special-effects showcased, if you’re a fan of 80s monster movies this one will definitely be right up your alley Hiruko and his minions are a true sight to behold and the director uses almost every 80’s style effect in the book to bring them to life. From animatronics to stop motion animation, it’s all here and the creepy aesthetics and setting of the film are the perfect place for this all to unfold. Also the movie’s got a relatively lean run time I’d less than 90 minutes, so it’s not something that’s going to put you to sleep. A true visual treat as well, with a little bit of everything for everyone. It’s ambitious horror film from what I consider the tail end of the golden age of the genre that more audiences in the U.S.A need to view. A cross between Ghostbusters, Evil Dead II, Poltergeist & The Thing done by way of Japanese brilliance. Also a perfect movie for this Halloween season that you might not have seen before! Physical copies of this can be pricey and hard to track down but I’m certain it must be streaming somewhere?! This need a deluxe blu ray release badly!!

‘Mystics in Bali’ from 1981 is truly one one wild and crazy Indonesian horror flick and just what I was craving during lockdown! My first viewing of this gem would have admittedly been better had I not known a damn thing about the plot, so if you’re reading this and are interested, I’d suggest checking it out blindly to get maximum enjoyment! So you’ve been warned… 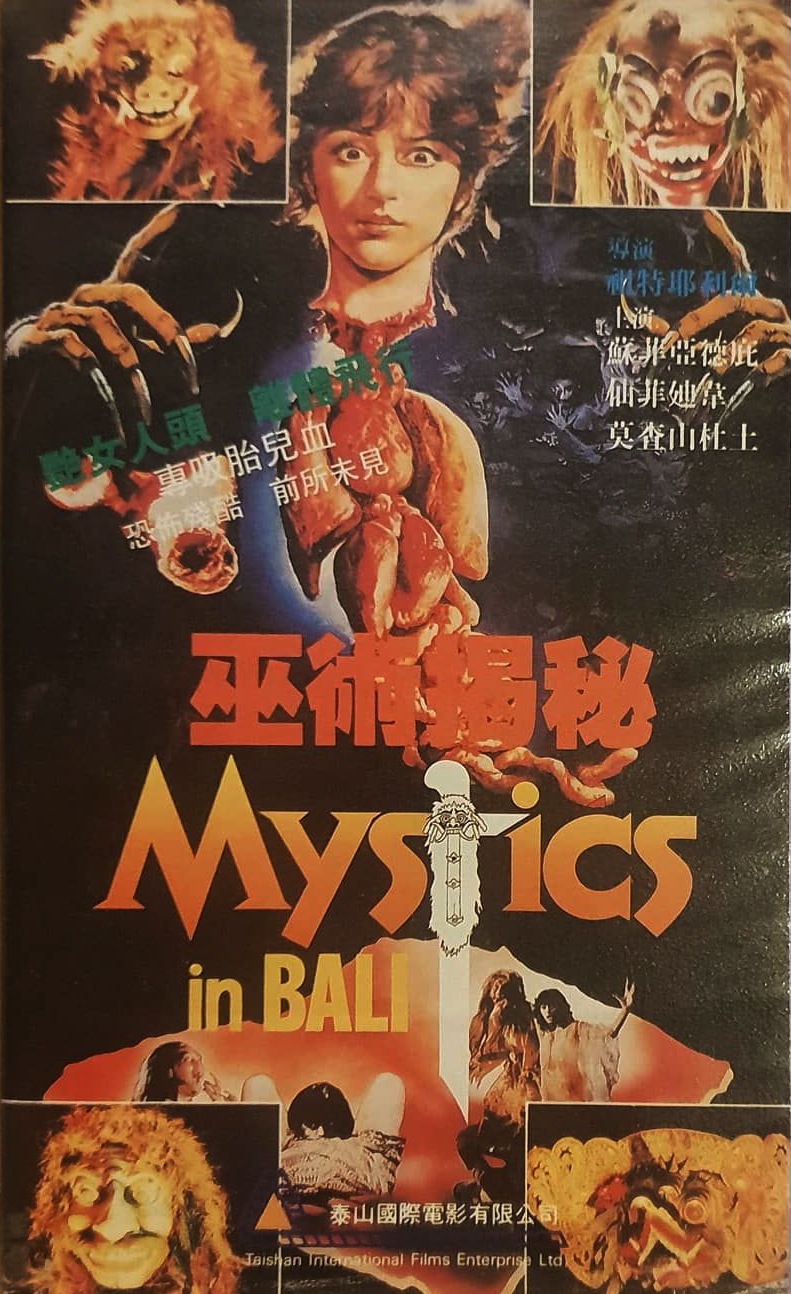 Anyway I’m kinda new to the whole Indonesian cult cinema scene, but I can say so far everything I’ve checked out has been pretty top notch. Mystics in Bali is 100% weird and wild. It follows an American named Cathy who travels to Bali to do extensive research for her book on the mystic ways of the mysterious black magic cult of the Leyak. She meets the handsome Mahendra a local man with knowledge of the dark local magic who also happens to have connections to a woodland witch. He takes her out to the forest to her lair and the bizarre woman vows to expose the secrets of the dark arts and their rituals to Cathy. Excited to get this exclusive info for her book she continues to meet the witch, who in turn tricks her into becoming her evil minion, transforming her into a Penanggalan, a horrific flying head with internal organs hanging from her neck!! GAAAHHHH! 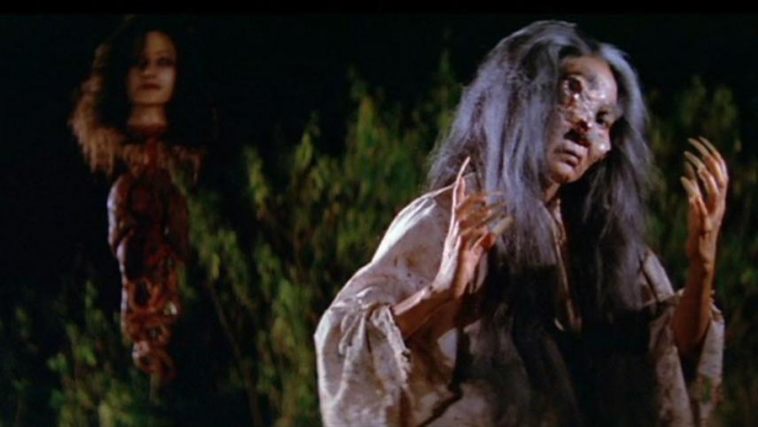 Things go from bad to worse, as Mahendra has fallen in love with Cathy by this point and has no other choice than to ask his uncle Machessea practitioner of magic himself, to help him stop the witch and save Cathy from the curse of the sinister Leyak. This leads to a pretty epic battle towards the end making the whole thing a such a bizarre slice of foreign 80’s horror, it’s most definitely essential viewing for genre fans! There’s a pretty intriguing story here to fuel the horror as well along with the sets and general locale of the film make this a special treat by just that alone. There’s also some low budget but fully ambitious special effects at play here that really amp up the general madness of this movie. Also prevalent are a few relatively shocking moments here that are unlike anything I’ve personally ever seen before in a horror flick. 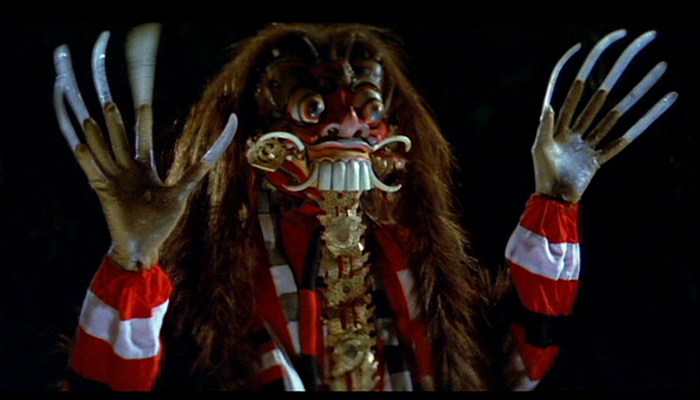 Some “must see” sequences that will stick with fans of the genre and leave you scratching your head in disbelief! The creature Cathy becomes is clearly the main attraction here and surely is one of the freakiest movie monsters I’ve seen in some time. The final showdown is a pretty great time as well, sure it’s a clunky battle, but it’s a ton of fun to behold. It’s no wonder that this movie was done by the same director, H. Tjut Djalil who also brought us the mega bonkers ‘Lady terminator’ which is def worth tracking down! I’ve also heard that his movie ‘Dangerous Seductress’ is quite a wild gem as well. So..Mystics in Bali is a true oddball, one of a kind horror flick and leads me further down the path of an era of movies other countries were producing during the 80’s that rival some of the best the USA had to offer-Check it out! 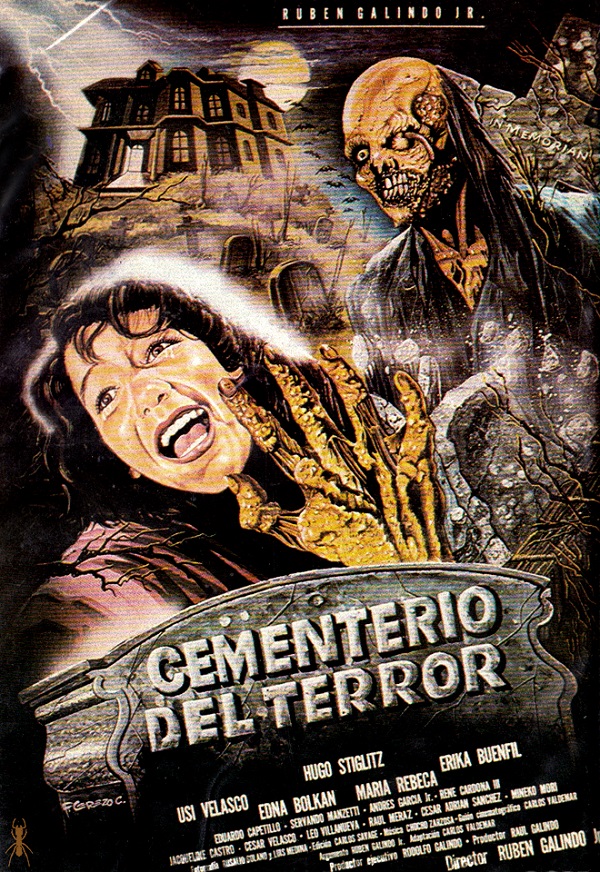 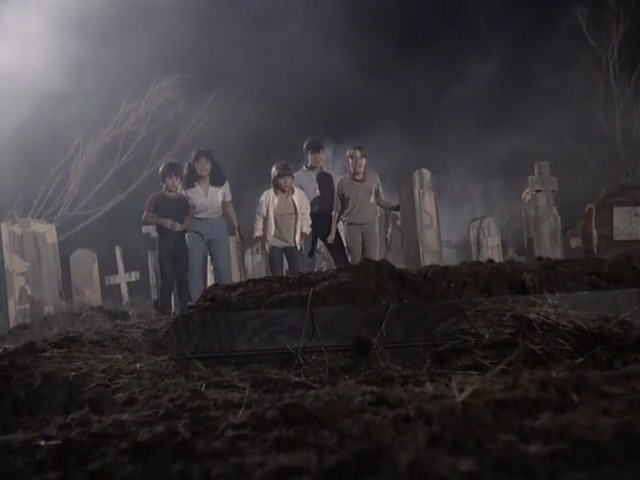 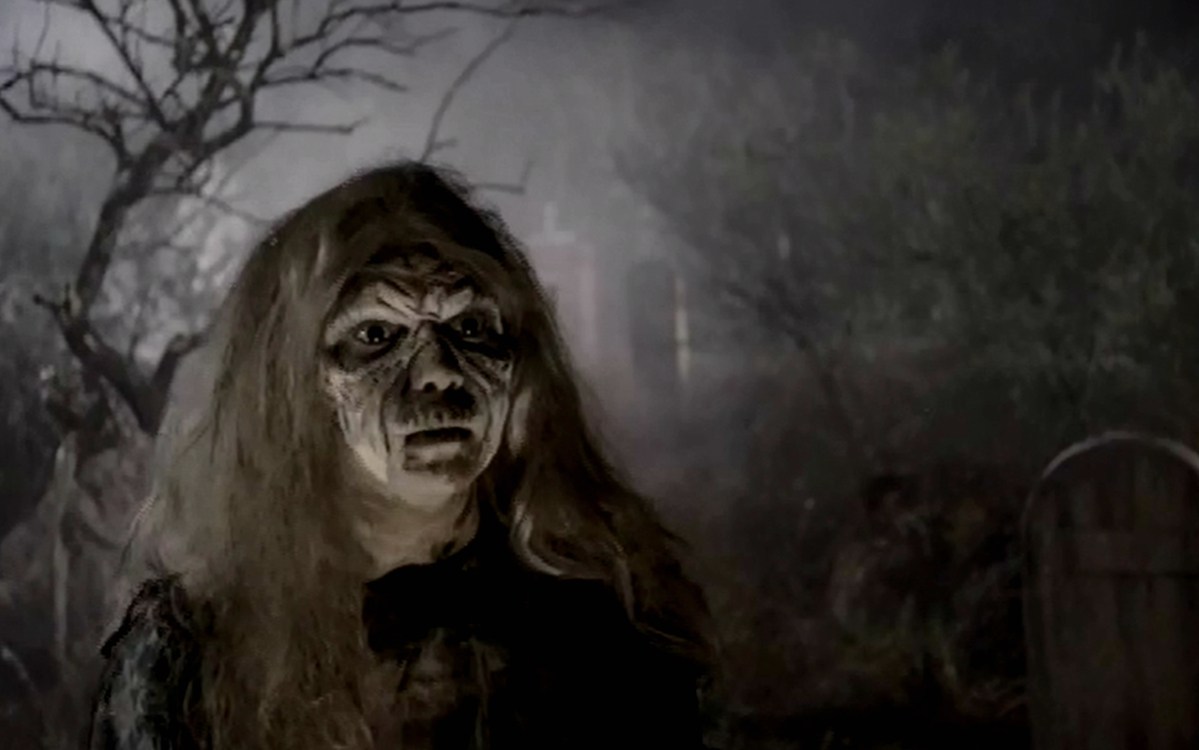