I’m willing to bet you’re just like me and never heard of this near “forgotten ’til now” 80s gem from Japan: The Legend of The Stardust Brothers! This incredible movie from 1985 is most definitely one of the most unique oddities I’ve stumbled upon in quite sometime. An incredibly ambitious musical gem, packed with practical effects and eighties fashion that will likely knock your neon socks right off! 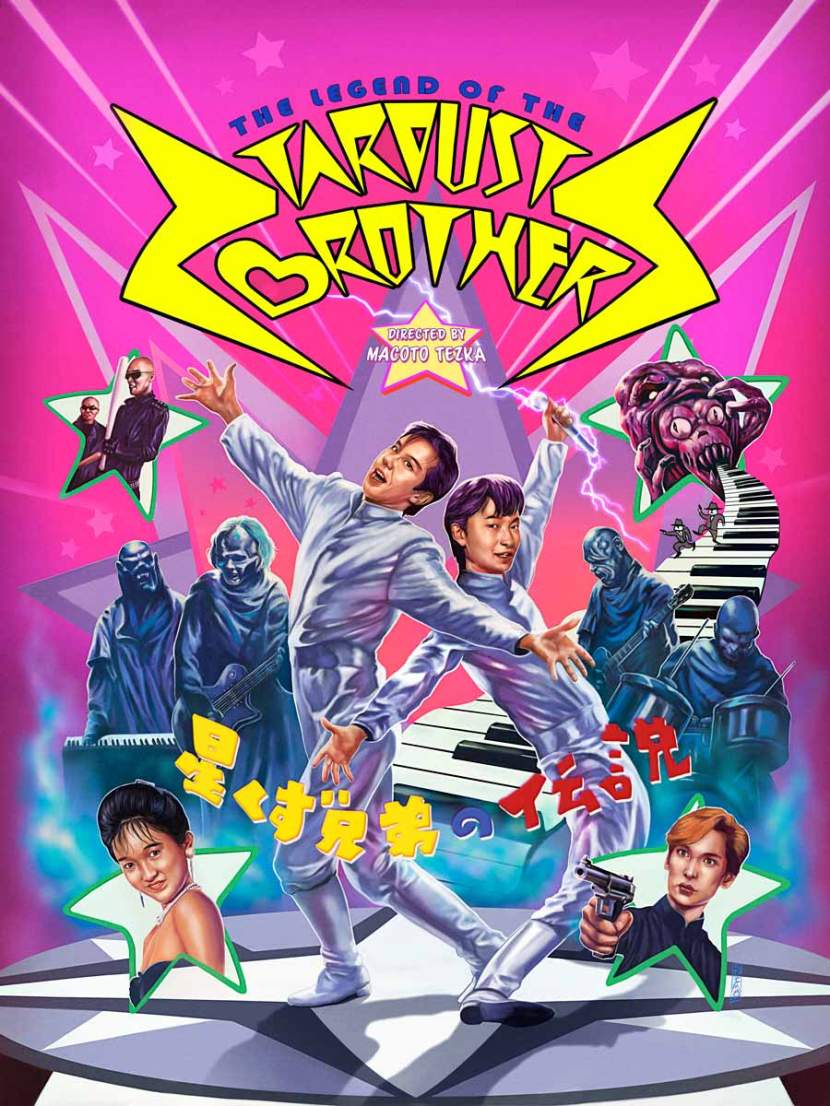 It tells the tale of  two struggling rival musicians: one a rowdy punk rocker and the other an egotistical wanna be popstar who meet a mysterious man while sharing the same bill  at a seedy night club. He offers them the contract of a lifetime, claiming that within one week, if they follow all the rules, the two of them will be rocketed to full blown pop super stardom. That is as long as they join forces, from that point on become The Stardust Brothers and tell the world they are indeed real bonafide brothers.

Now admittedly I’m not a real big fan of musicals, there’s only a few that I really love (Popeye, The Wizard of Oz & Little Shop of Horrors immediately come to mind). However this one has now EASILY made the list as a must watch and it’s something I’ll be watching over and over again. Essentially it’s the wildly unpredictable story of the bizarre rise and fall of this pop duo. It’s firmly glued together with a series of incredible little musical vignettes that are a visual and sonic feast.

A sweet mixture of punk rock, powerpop & some cool new wave numbers, connecting a series of incredibly ambitious music videos within one insane narrative. There are touches of the supernatural as well as a ton of amazing special effects, stop motion & practical monster effects that really impress, especially if your a fan of the 80s. It’s also filled to the brim with some of the best Japanese fashion of the era to go along with the catchy songs. As I write this, their theme song is still stuck firmly in my brain. I’d love to get my hands on some vinyl of the soundtrack. Aside from the cool music, luckily it’s got a pretty unique story that blends elements of scifi, horror and even a bit of romance. It’s unexpected twists and turns deliver a frenetic, action packed finale that will  leave you pondering the events of the entire film. Its all done with a heroic dose of heart too. 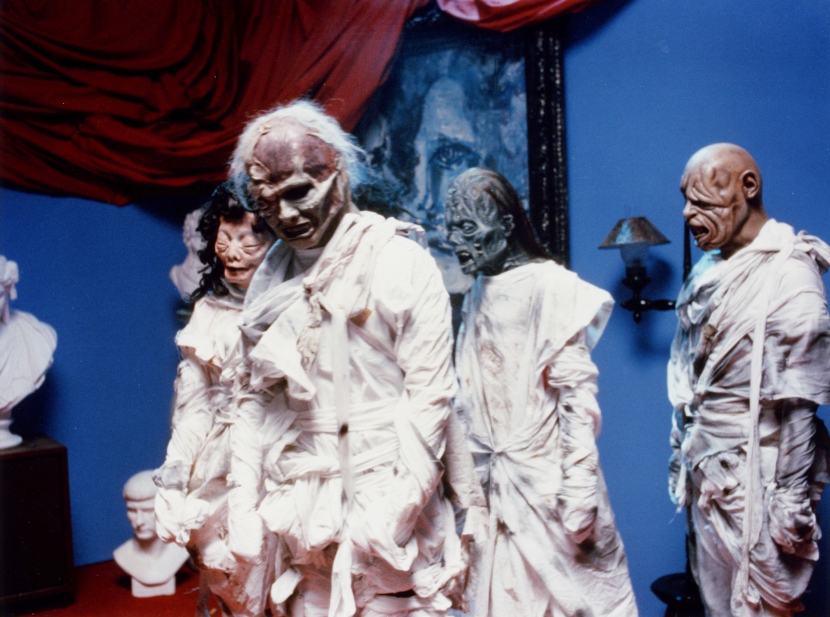 Just how far do you really go to live the life of a superstar without any of the hard work required to get to the top? The Stardust Bros go the distance and the musical journey is definitely a wacky one worth taking. Apparently director Makoto Tezuka tried to catch lightning in a bottle a few years ago by producing a direct sequel, but after doing a little poking around it doesn’t seem like he was quite to able to recreate the neon electromagnetic magic of the first.

In the meantime I highly recommend picking this one up on a newly released blu ray from SRS Cinema. The Legend of the Stardust Brothers is packed with pure charisma, tons of vibrant youthful energy and shows you exactly how inventive some directors in the 1980s were in Japan with a limited budget!  Don’t sleep on this one!

I checked out ‘X-Men: Apocalypse’ today, a movie I was super excited for as I was a huge fan of ‘Days of Future Past’ and the other Singer X-Men movies. I’m sorry to say that for some reason this latest installment is a big bloated mess that sadly misses the mark by a boatload. I loved that the last movie was set in the 1970’s & was so stoked on the idea of this one taking place in the 1980’s. However, aside from some cool vintage wardrobe and a Ms. Pac-man video game there wasn’t much else in this one that for me really brought me back to that great era of the X-Men comic books.

There was simply just too many damn characters running around, the story was missing heart and the special effects were just too much of a cartoony CG mess to convince me that the Earth was in any serious danger. I had high hopes forthe movies antagonist Apocalypse too and didn’t even mind his look, which most people were in a frenzy about from the start. However, Apocalypse as a villain was just way too hokey to be taken seriously and yeah he really did look a bit ridiculous I must admit.

And Talk about a villain who takes himself way too seriously, jeez, he seemed more like an overdramatic cartoon version of the legendary villain. We’re really not given that much character development here for anyone, everything that happens happens way too coincidentally including the origin of people’s hairstyles! It seems Apocalypse is not only responsible for huge amounts of global chaos but also for Storm’s white hair & ALSO Professor X’s bald ass head!! END_OF_DOCUMENT_TOKEN_TO_BE_REPLACED 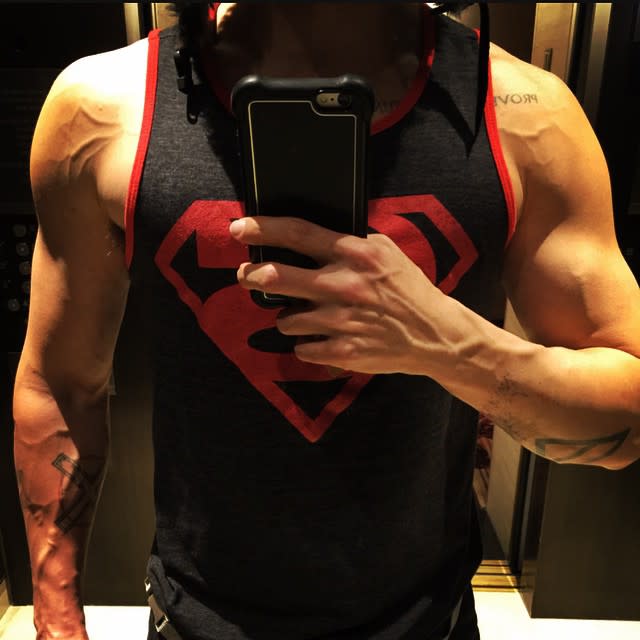 Hey ladies, you just have to check out this image of these custom made R2D2 heels! These are pretty much the coolest shoes ever, I mean looking at them make me wish I was a woman so I could properly do them justice by making myself a pair!

This is one of those “why didn’t I think of that moments” that happen to me so often. Well ladies if you are feeling crafty, men if you want to excite your nerd girl crush or hell nerd crossdressers go crazy! Check this here at Indestructables.com to get the directions to build your very own pair!

Here’s just a reminder that Raquel Welch was a geeks dream come true way back in the 1960’s and 1970’s obviously for roles in movies like One Million Years B.C. and Fantastic Voyage was one of my all time faves as a kid!

Well anyway check her out as she leads a couple stylin’ alien dudes with her sci fi space lady dance ensemble!
Pretty rad space age fashion back from this 1970 clip I am sure Captain Kirk went crazy for her-get down!!