I just finished reading issue #1 of the new four issue limited series from Image called “Big Man Plans” and it’s quite a debut! This one is a full on mean and dirty little story about a little guy named ‘Big Man’ who’s lived his entire life being made fun of, beat up and bullied. When Big Man finally hits his breaking point he goes bat shit crazy bringing revenge to those who’ve wronged him. Kinda like a smaller version of Michael Douglas in Falling Down. We get an in depth look at just what has pushed Big Man over the edge and it really ain’t pretty. He’s like a dog that’s been teased it’s entire life, all he knows the world to be is a rotten place and now he pissed.

Big Man has had quite a life, spending time unofficially working for the United Stated Army in Vietnam as special type of solider who can fit in to places no other can and get the dirty work done in the dark. He’s been to prison, kicked the shit out white supremacists, punched out cocky kids and even had the time to be a bit of a ladies man. He’s quite a guy, an angry little bastard who’s got clearly quite a story ahead of him. Issue #1 is said to be the tamest of them all and if that’s true the next few issues are going to be quite wild ride.

Fellow Portlander Tim Wiesch and Eric “The Goon” Powell have done a great job building the intrigue here for this new character. Powell as usual shines as the artist on this title, bringing the grit and dirt in every panel. I’m curious to see where this little mystery is headed and hope that ‘Big Man’ at the end of issue number four can find a little happiness in his thus far miserable existence. Check this one out if you’re looking for something that’s bound to pull out some serious shocks! Get the full scoop with a great interview with the creators of the series right here

Here we are with some quick comic book reviews from my haul at the shop this week! If I had a million bucks I’d be reading or testing so many more, but these books add up quickly at 4 bones each! So let’s get started here!

1. Big Trouble in Little China #1, Boom! Studios
I’ve been looking forward to this one for quite a while as we have John Carpenter & Eric “The Goon” Powell writing it together. This one starts off literally right where the movie ends which is a cool thing for die hard fans! Though I enjoyed the issue it’s tone felt a little off from the movie and maybe a little too cartoony for it’s own good. It felt like it was a full on comedy, which isn’t bad but it left me craving a little more adventure and perhaps slightly slower pace to bring us directly back into this sequel. I kinda imagined I was reading the lost story board for the never made second film. The dialogue was pretty fun, I will say I could totally picture Kurt Russell’s voice the entire time I was reading. I’m not a huge fan of the artwork for this issue, it’s not to say Brian Churilla isn’t a great artist, but one thing I enjoyed about the movie so much was the awesome set pieces and most of the time in this issue the backgrounds are simply blank solid colors, which for me feels a bit lazy for something we have waited this long for. This issue is getting a lot of buzz, as I do recommend it I’m not sure yet if this one will keep me on board for the entire ride. I’ll be back for issue #2 though… 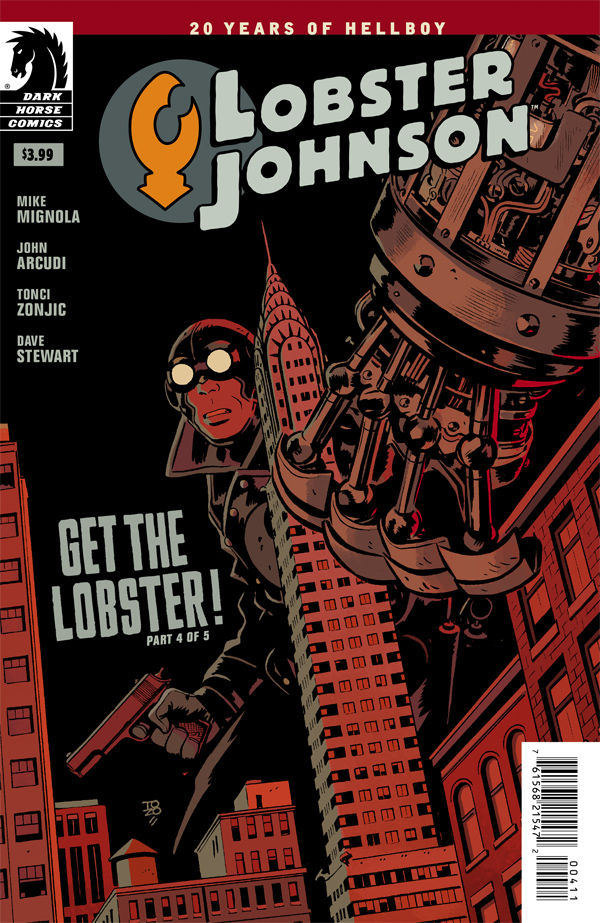 Lobster Johnson “Get The Lobster” #4, Dark Horse
What can I really say about Lobster Johnson? If you love movies like Indiana Jones and noir type adventure stories you’ll greatly enjoy this storyline! Issue number 4 is jam packed with more weird ass characters & awesome art by Tonci Zonjic. It even has a cool ass battle that pits the Lobster against a metal armed man & giant Gorilla (who also sports mechanical arms) in a miniature model city. This goes down more like a brawl from a Godzilla movie! Anyway John Arcudi and Mike Mignola keep the bizarre story tightly intact furthering my desire to see Guillermo Del Toro tackle a big screen adaptation of this always excellent title. If you’re not familiar with Lobster Johnson you’re missing out big time!

Amazing X-Men #8 Marvel
Wow I decided to add a Marvel comic to my small load this week! I was particularly X-cited to pick this one up and give it a try as it features my favorite Canucks The Alpha Flight! The five issue arc is called “World War Wendigo” and you know I love me some good Wendigo storys. This one is off to a fine start too as Wolverine travels up to Canada to visit his friend Heather Hudson (also known as Vindicator) to help her track down Guardian (her husband) who disappeared after they got into a possibly relationship ending lover’s quarrel. The two of them suit up and go looking for him, but what they find ends up being and extremely dangerous situation for them both, especially Wolverine who no longer has his healing factor. This one looks and reads great so far, and i’m usually not a big Ed Mcguinness fan. The issue actually kind of reads like a horror movie which is perfect for a Wendigo storyline. I’m hoping the next issue features the rest of the Alpha Flight and generates some interest in the team again-they deserve their own monthly series again by a writer who can match the feel of the classic John Byrne run in the 1980’s!

The Woods #2 Boom! Studios
Here we are with another from Boom! Studios and it’s a good one. Issue number one was one of my favorite debuts in some time. Issue #2 continues the story of the high school that’s been mysteriously teleported & stranded on what appears to be an alien moon! We get a little more to the story as the teens have decided to take matters into their own hands and while the teachers spend most of their time sitting around a table, frightened discussing what their options are. It sets ups a nice teacher vs. student scenario that will be interesting to see unfold now that the kids feel they don’t need to be listening to the adult anymore now that they’re not on earth! Though this issue is not quite as page turning as the stellar first it’s building the story nicely with even more crisp artwork than the previous. There’s also some nice monster moments that I’m certain will make issue number three one not to miss. This one is becoming a favorite of mine quickly-go check this out!

T’was a good week at the Comic book shop! Let me know if there’s any other titles worthy of the 4 bucks a pop drop!!!

Wow I just recently saw the teaser trailer for the upcoming Goon Movie adaptation and it’s looking incredible!! Those of you who aren’t familiar with the Goon should check out the trade paperbacks from Dark Horse comics, they are anything but ordinary! With the fantastic artwork and macabe stories of Eric Powell this comic has got to be one of the most off the wall books I have read in years. Trust me.

Check out this rad teaser from David Fincher, starring Paul Giamatti and Clancy Brown. It looks liek this is the perfect medium for this comic to be portrayed on film-I can’t wait!!