You all must know how disappointed I have been with the Incredible Hulk in the comics for the last few years, the Red Hulk, A-Bomb, The Incredible Hulks….Uggh! I just couldn’t stand it! So naturally I was pumped to have all of that bull shit wrapped up with the mess that was made of the Hulk over the years when I heard that Hulk was going to get a new writer and start over again at number one with Jason Aaron and Mark Silvestri on board. Now here we are at issue number four and I have got to say my attention is seriously faltering.

The concept seemed interesting enough, well sorta, Hulk and Banner have split into two different entities and are at odds with each other. Well too bad John Byrne already did this in his short but brilliant stint / story arc way back in the 80’s. But well we all know how original ideas are hard to come by now days…anyway what we have ended up with is a long haired bearded Hulk who lives in the crust of the earth with the mole men and a psychotic dick of man, Bruce Banner who lives on an the gamma Island of Doctor Moreau. Seriously borrowing a bit TOO much there from Moreau-it’s almost sickening. But hey what the hell right it’s the Hulk?

Well for some reason Banner is trying to turn into the Hulk again but it ain’t working and he’s become a mad man, sending his Doc Moreau clones after the real Hulk and pissing him off. So the Hulk decides to go after Banner once and for all…oh yeah the Hulk is intelligent again. How the hell is it determined these days if he’s a mindless monster, a child like brute or an intelligent bad ass? I have been confused for years about this all. Anyway Amanda Von Doom (no relation to Doctor Doom, apparently that’s a common last name?!) has gotten the Hulk to help her destroy Banner because her group of assassins takes down mad scientists exclusively. How convenient huh?

Now they head toward Gamma Banner Moreau island and get attacked by Hulk Sharks, Hulk bats, Hulk Tiger men ect. It’s a pretty weak story if you ask me…I almost prefer Abomb to this really. Then there’s a question of the art, I used to like Silvestri, but today his sketchy art reminds me more of slightly talented Rob Liefeld, I also don’t really dig the long haired handsome bearded “hunk” Hulk that is portrayed here-or for that matter the “old Hulk” they for some reason draw on the cover with his “foot ball player / meat head high top” bowl cut. To make matters worse they have got Whilce Portacio stepping in on issue #4 for some seriously crap-tas-tic artwork that’d make Liefield cringe in his Levi’s 501’s & Doc Martens. I think I just have to say it-the Hulk sucks again!!! How is that possible? Am I crazy Hulk fans?! Have I gone mad and this shit is actually brilliant?! I am hoping this story ends soon and a new writer and artist take it over….hey Mantlo, Stern, David, Jones, Byrne and Buscema rescue me from this ongoing Hulk Nightmare!! 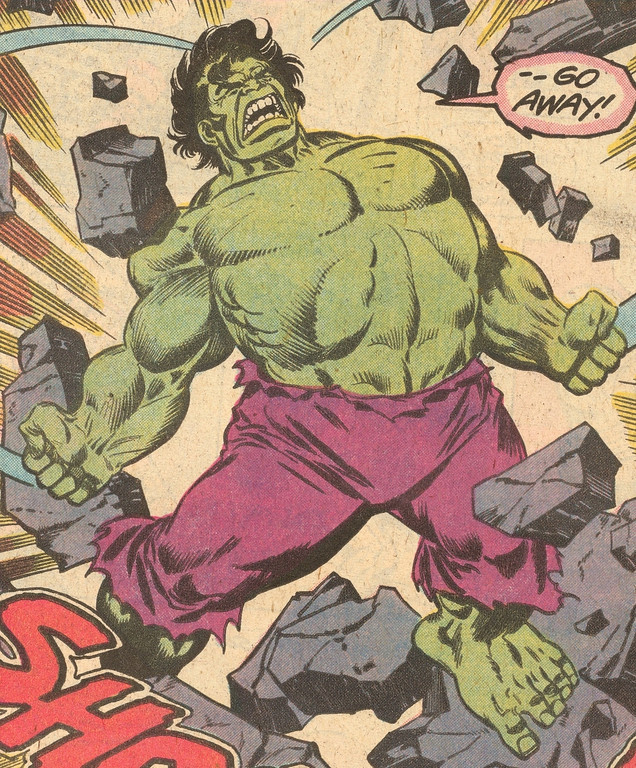