I’ve been meaning to make this post for a while now as I’d recently seen someone had made a super cool petition to get one of my favorite bands, ALL to record a new damn record!

If you don’t know who ALL is, you should probably be ashamed, but hey no worries, let me give you the scoop, basically they’re the Descendents minus Milo Aukerman and formed after he left the band in 1987. Similar sound but with several different singers through the years and basically the soundtrack of my teens and beyond! Pop punk perfection. However they never quite got the recognition of the Descendents yet had definitely made a stronger run for “rock stardom” in the nineties then the ‘Dents ever did, even signing a major label record deal.

Over the years we’ve luckily gotten a good amount of new Descendents material, and don’t get me wrong, I’m fucking stoked about that! But let’s get serious and most importantly let’s get ALLULAR! It’s going on 22 years since ALL’s last record, ‘Problematic’ and we’re well past due for a new one.

Over the last two decades the band has also played shows with ALL three of their singers, Dave Smalley, Scott Reynolds & Chad Price, which has led many legions of fans to request a new ALL album that features ALL three of them on lead vocals! The best way to decide who’s gonna sing on this epic-ness is simply to get them ALL! Like a sort of 3-way split full length divided up equALLy, In fact I was so pleased to see that the maker of this petition had the same idea!

Has any other band in history ever made a brand new album featuring ALL of their previous vocalists? I’ve never heard of it happening. How epic would that be for the fans? So not only would I like this post to circulate around with THE PETITION to get the band to make a new freakin’ album, I also am hoping the 3 headed monster of ALL will indeed return and merge ALL vocalists onto one new album, in other words: ALL of ALL!

So if YOU’RE a fan of the band please get this out there and let’s make it happen, I think this petition needs and deserves WAY more fucking signatures! Kudos to whoever put that together you’re totally ALLULAR! So maybe this thing can get the attention of the core band members, Bill Stevenson, Karl Alvarez & Stephen Egerton. When I first came across the petition on Facebook it was slightly confusing what the petition was for if you didn’t click on the actual link, so I’m hoping with this to clear up any confusion and get more people to sign it! Let’s get the band to know we want this dream album to manifest! ALL? Yes ALL!!! SIGN THE PETITION HERE!

Today was a special occasion as one of my all time favorite bands dropped a new song from their upcoming album due out July 29th! Yep the Descendents are back and kicking ass again with an old school sounding track called Victim of Me. If you haven’t already check it out below! The Descendents prove that they indeed have NOT grown up!! Check it! Milo, punk rock’s most famous nerd is back!

I’m taking a moment here to share a new song from my latest musical endeavor The Davis Baby! Yes it’s named after that little mutant monster baby from the 70’s horror flick “It’s Alive”. See back in the mid 90’s I lived in Wisconsin & I played in a pop punk band called Ben Grim, we were inspired by bands like Descendents/ALL, The Doughboys, The Hard-ons ect, we released some records and toured around the US with our best buddies Fun Size (one of the best pop punk bands of the 90’s). It was some of the best times of my life, as Bryan Adams might say. So I decided to put together a group today that sort of brought that old Ben Grim sound back. 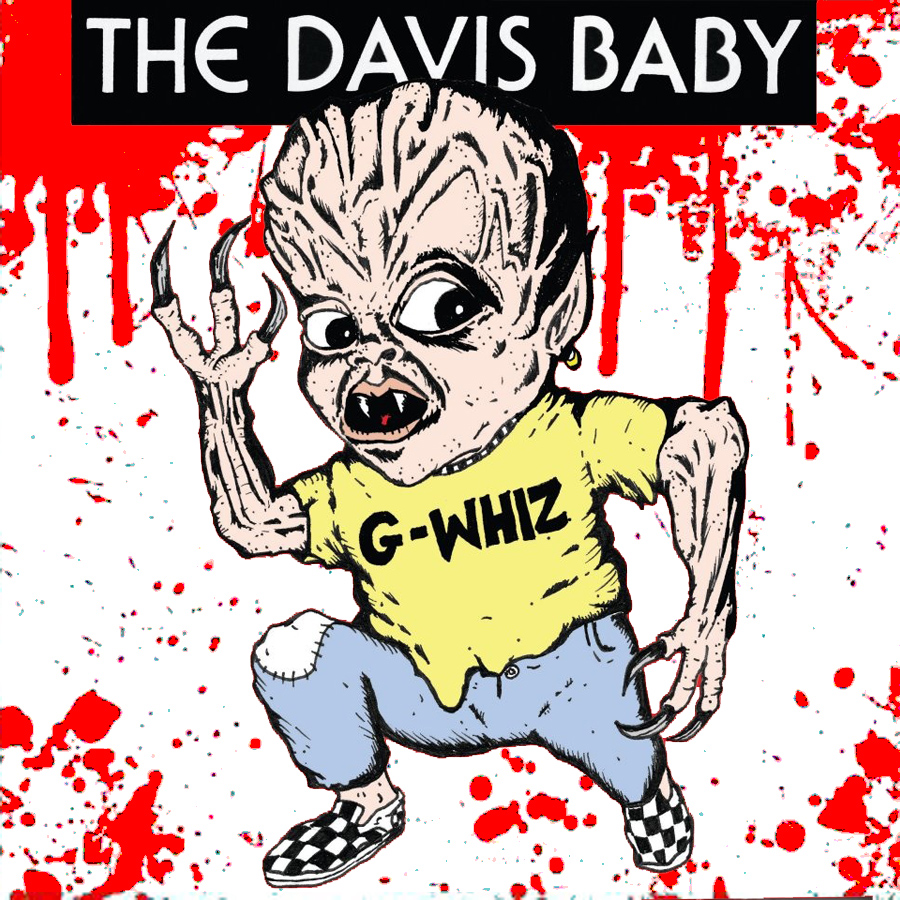 We wrote four songs of crunchy old school power pop the way we would have done it back in the Ben Grim days. The project features my former band mate Joel Vega, who sang and played guitar in Ben Grim with me, my old pal Kevin Carl from lates 80’s/90’s band G-Whiz & Jim Wadsworth my good friend/fellow D&D player from Portland, Oregon band Danger Death Ray. We posted a FREE/name your price download of our new song “Laid to Rest”. It’s meant to be free but bandcamp doesn’t just let you list the track as purely “free”.  So please no need to pay just download it!

It’s gonna be featured on our upcoming split ep with Higley (Kevin Carl & Duane Kiener of G-Whiz, Kris Roe of The Ataris & Bill Stevenson of Descendents/ALL/Black Flag) out soon on SP Records. The song also features Mark Arnold from Big DRILL Car on guitar. Which we were fully stoked to have play on it as Big DRILL Car remains to this day one of my favorite bands ever!

I’m trying to get the word out on this project, and it’s tough in this day and age to get anything out there on your own in the vast sea of the internet, so if you like it please help me share the song-maybe we’ll record more or start playing live!