Ok so check this out, here’s two of my favorite movie covers /posters for two of the coolest 80’s movies ever! Dreamscape and A Nightmare on Elm Street, now I know that probably everyone is very familiar with the artwork of both of these BUT I found out recently something when I was trying to figure out if these two movies shared the same cover artist. They do not but they share something else quite sinister I found out. It turns out that the artwork of a Nightmare on Elm Street features a familiar face from the Dreamscape movie universe- OR perhaps it’s the other way around?! If you look closely first at the Dreamscape art done by Drew Struzan take note of the snake creature above the title, who makes several appearances in the movie:

Ok now let’s take a look at the equally incredible artwork by Matthew Peak who did the artwork first five Elm Street flicks. Look closely above the blade of the pinky finger on the right, do you see it? It’s the snake creature from Dreamscape…..

Here’s it blown up a bit… 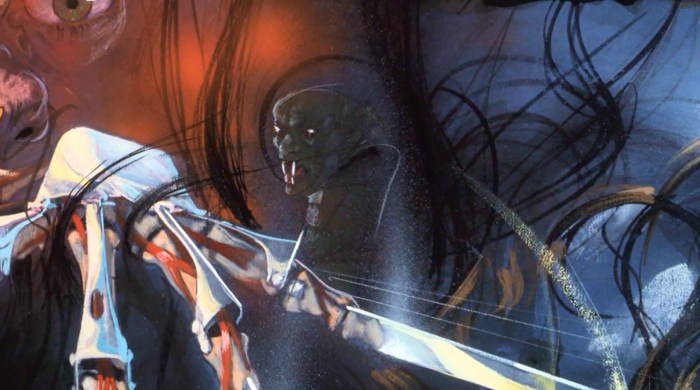 Both of these movies came out in  1984 and as I did more research on it it was indeed added by Matthew Peak as an homage and this could be proof that maybe just maybe Dreamscape and A Nightmare on Elmstreet are shared universes- Now if this took place today I’m certain you’d likely see Dennis Quaid in an Elm Street sequel where enters the dreams of Freddy’s victims and takes on Mr. Krueger himself! Damn what a missed opportunity-how awesome would that have been?!!!