Yesterday we heard the news of master special effects artist / director John Carl Buechler’s passing & it reminded me once again of just how amazing his work in the industry was and just how many of the movies he was involved with have been a huge part of growing up. From cult classics like Troll, Dolls & The Dungeonmaster to arguably the best installment of Friday The 13th, Part VII: The New Blood to Indiana Jones: The Last Crusade, his work has brought me soooo much joy throughout my life as a movie maniac.

As one of the biggest fans of monster movies, he brought some of the best to the big and small screen. It led me to comb Youtube for some choice clips of his that feature some of my favorite creations of his. They just don’t make em’ like this anymore, Mr. Buechler you will be missed but your incredible creatures will live on forever, that is for sure…

Been on a VHS binge lately watching tons of old forgotten movies, some are of course are steamin’ turds but every now and again you come across something that’s a total delight! I ran across a copy of 1991’s ‘Children of the Night’ and was fairly certain it was again going to be another crapper, however this one proved to be a totally sweet romp of a horror comedy. I’m a giganto fan of 80’s horror and this one while being from 91′ has still got that great old school vibe and charm coming off the tail end of 1980’s. In my opinion a lot of flicks up through 1994 more or less continue to keep that feel in tact. That being said, I had a good feeling about this one when I’d seen that Peter Deluise of ’21 Jump Street” fame was billed as the star, I watched the shit out of that show as a kid in the 80’s and he was one of my favorite characters from the series for sure. Then I noticed Karen Black also starred and then that the director was Tony Randel of ‘Hellraiser 2’ & ‘Ticks’ fame.

Well I’m pleased to say from the start of this one (which I found out later was actually a Fangoria production) it fully delivered the goods and then some in all the ways I’d hoped for. Playing much more like a horror comedy we get a sweet little story of of teenage girl played by Ami Dolenz (also in ‘Ticks’ from 1993) who lives in a small town and accidentally awakens a wicked vampire lord while swimming in an underground pond below a church. Yeah that’s what she and her buddy do for fun…..well schoolteacher played by Peter Deluise later comes to town to see what’s up and ends up in the thick of a vampire attack where he teams up with the teen girl and a local town drunken preacher played by vinatge SNL alumni Garrett Morris. I gotta say when he arrived it was the icing on the damn cake, he’s known also as “Chocolate Chip Charlie” from the horror classic ‘The Stuff’ from 1985 and in this movie he drives around town at night drinkin’ mad amounts of whiskey in a crazy van that’s got a giant glowing cross spear mounted on the front it it to impale vampires with. By that point in the movie I was already in, but this solidified the deal for sure. 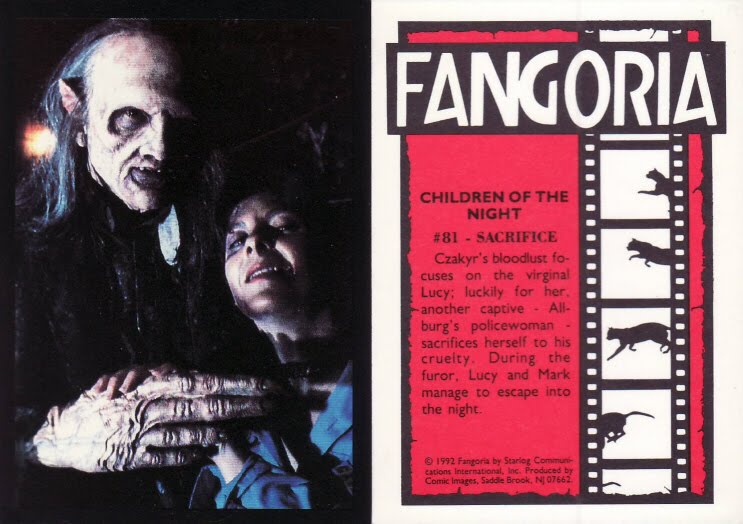 At the end of the ‘Children of the Night’ day plays a bit like ‘Evil Dead 2’ none of it can be taken too seriously but it’s not a full on spoof either. There’s a lot of cool FX work going on here as well as cool spooky inventive sets and locations. It’s a neat little horror adventure that’s not afraid to add some heart to it either. A lot like gory teen horror comedy that’d fit quite nicely along with 80’s cult classics like ‘Vamp’, ‘Critters’ or the highly underrated ‘Night Life’ from 1989. There’s also some cool ass action sequences and you also get some Karen Black super weird vampire lung moments to ponder upon! If you’re looking for some super fun lost nostalgia to watch with a gang of movie maniacs ‘Children of the Night’ is a prime choice in my opinion!

Zombies are popular…right? So I decided to go on a hunt for some of the recent zombie releases and make a blog collecting them to inform our readers…quickly, I realized that zombies have gotten out of hand. This is my testament to the good, the bad, and the dead of the offerings over the last couple years (and upcoming). Oddly enough, I have not seen 75% of these. And since I could hardly sit through half of these trailers…I am sure the movies are much, much worse. If you can stomach it, here is a gut full of the putrid smorgasbord of undead flicks for your enjoyment.