l’m BACK & I never saw this one coming: for some reason I decided it was time to finally check out ‘976-EVIL Part 2: The Astral Factor’, which I’ve literally been putting off for years & what a sweet little horror flick indeed! I like part two so much I’d say it’s definitely more fun than the original. There’s a big difference here in directorial duties, the first installment featured horror legend Robert “Freddy” Englund in the director’s chair for the first of only two times, while part 2 features Jim ‘Chopping Mall’ Wynorski. Yeah Wynorski being at the helm here immediately got me amped, as he’s done some pretty undeniably awesomely cheezy 80’s flicks besides just Chopping Mall. A few of my favorites like Return of the Swamp Thing, Hard To Die, Not of This Earth, Sorority House Massacre 2 & Deathstalker 2, so it’s no surprise really that 1991’s ‘976-EVIL 2’ delivers a similar formula only this time we find him playing the horror a bit more straight, at least in by his standards like he did in ‘Chopping Mall’. 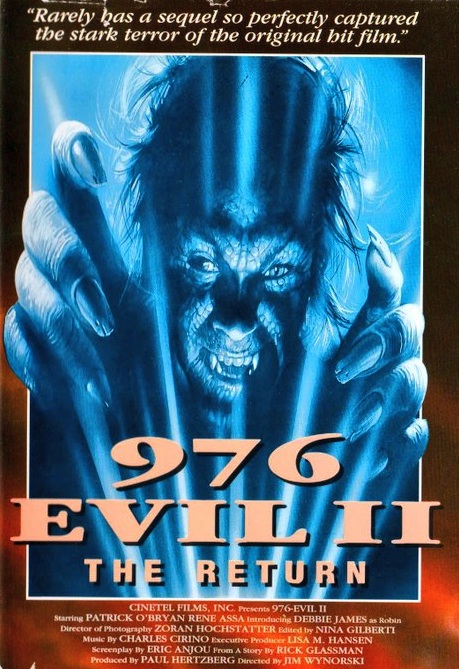 We’ve got one of the the stars of the first movie back as well, Patrick O’Brien returns as ‘Spike’, who now roams the back roads of the USA ridin’ on his bad ass chopper, clad in tuff black leather. Yep a total “bad ass dude” for sure after the events of the last installment…That evil phone number is out there, still tormenting people randomly, calling pay phones & a college professor ends up the prime target of evil when he picks up! Soon the local college campus is being terrorized by a crazy supernatural slasher & a curious student named Robin decides to take on the case. Of course bad ass Spike rolls into town on his hog looking for trouble, meeting Robin and immediately decides to help her sleuth out the case.

One of my favorite aspects of the ‘976-Evil 2’ is the villain played by Rod McCary, the evil professor uses astral projection to hunt down his victims. Most of the movie he’s locked up in the county jail and uses his creepy supernaturally powered astral body to do the damn dirty work! He also utilizes the ‘976-Evil hotline’ to mess up the college kids and all of it is a ton of fun to behold. The movie opening sequence sets the perfect tone of schlocky fun that rarely lets up throughout it’s run time making this one a nice lean cheezy supernatural adventure.

It’s surprisingly solid (and admittedly stupid quite often) with some really fun, spooky 80’s style fx I just can’t seem to get enuff of, some fairly ambitious action sequences and some good ol’ explosions. There’s also an excellent sequence where a college girl gets sucked into her TV set and arrives on the scenes of It’s a Wonderful Life & Night of the Living Dead that makes the movie worth a watch alone. Also expect a ton of babes n’ beefcakes, even a super kick ass cameo sequence by an ultra sexy, sultry Brigitte Nielson! If you’re a Wynorski fan and haven’t checked this out I highly recommend, if you’re just looking for a great party horror flick this one a damn good choice! Who’d a thunk it?!

Here’s one of the most ridiculously excellent movies I’ve seen in a looooong time! The year 1990 brought us Jim “Chopping Mall” Wynorski’s high rise slasher flick Hard To Die. I was lucky enough to run into a copy of this one while out combing the thrift stores and came to find it’s actually a pretty rare little movie to discover in the wild on VHS. I was pretty sure what to expect from the box art, it was tagged as the female version of “Die Hard” but the movie is actually a sequel to ‘Sorority House Massacre 2’ and features that movies main “antagonist” (same actor) as well as one of the women from said sorority in the previous flick. It’s known also as “Sorority House Massacre 3” and “Tower of Terror” but the most perplexing thing is that it uses actual flashback scenes to explain it’s ridiculous “plot” from ‘Slumber Party Massacre’ rather than ‘Sorority House Massacre’ or even ‘Sorority House Massacre 2’. I know crazy huh? What gives?! I guess it had something to do with the director showing the movie to Roger Corman and him loving it so much that he insisted on utilizing scenes from ‘Slumber Party Massacre’, a movie he’d produced, to be tied to these fantastic Sorority House sequels.

Anyway!! I digress, ‘Hard to Die’ is a lot more fun & frantic than I’d expected, it features a group of lingerie shop employee babes who’re going in to work the graveyard shift, doing inventory in a mysterious high rise. They run into the creepy dude ‘Orville Ketchum’ from ‘Sorority House Massacre 2’ who’s now the after hours janitor at the building and he tells them all the freaky story from ‘Slumber Party Massacre’. The ladies of course are totally creeped out by the guy but then to make matters even worse someone delivers a strange package that contains a bizarre ancient box, of course they open that shit up and it sets forth an evil spirit (done via animated hand drawn cells which I love) that rushes out into the halls of the high rise.

Soon a sadistic killer begins picking people off one by one. About that time as well is when a small fire triggers the sprinkler system and the hot babes “regular” clothes (which are pretty damn skimpy as it is) get all wet. What to do about that you may ask? Well…get changed into the brand new line of dry lingerie they’re taking inventory on of course! But wait, you can’t do that unless you take a long hot shower right?! So yeah all the women take their turns in the soapy shower before spending the rest of the movie running away from an evil killer in lingerie and high heels.

I don’t wanna spoil that much more of this one, but there’s so much idiotic dialogue & downright moronic decisions made to enjoy here that you’ll wanna have plenty of booze and your best friends around to witness the spectacle of it all. There’s also a bit of a “shocking” twist ending as well and some unforgettable truly over the top action sequences to bath in. Like the title of this post says these ladies take no shit especially when they come across a collection of machine guns in the third act. Yeah lots of running around like Bruce Willis shooting shit up while in lingerie & high heels. This one is nonstop lunacy, people these days try and fail miserably to replicate movies like this, track this one down if you’re looking for a truly unique party flick-it delivers the damn goods and then some!! 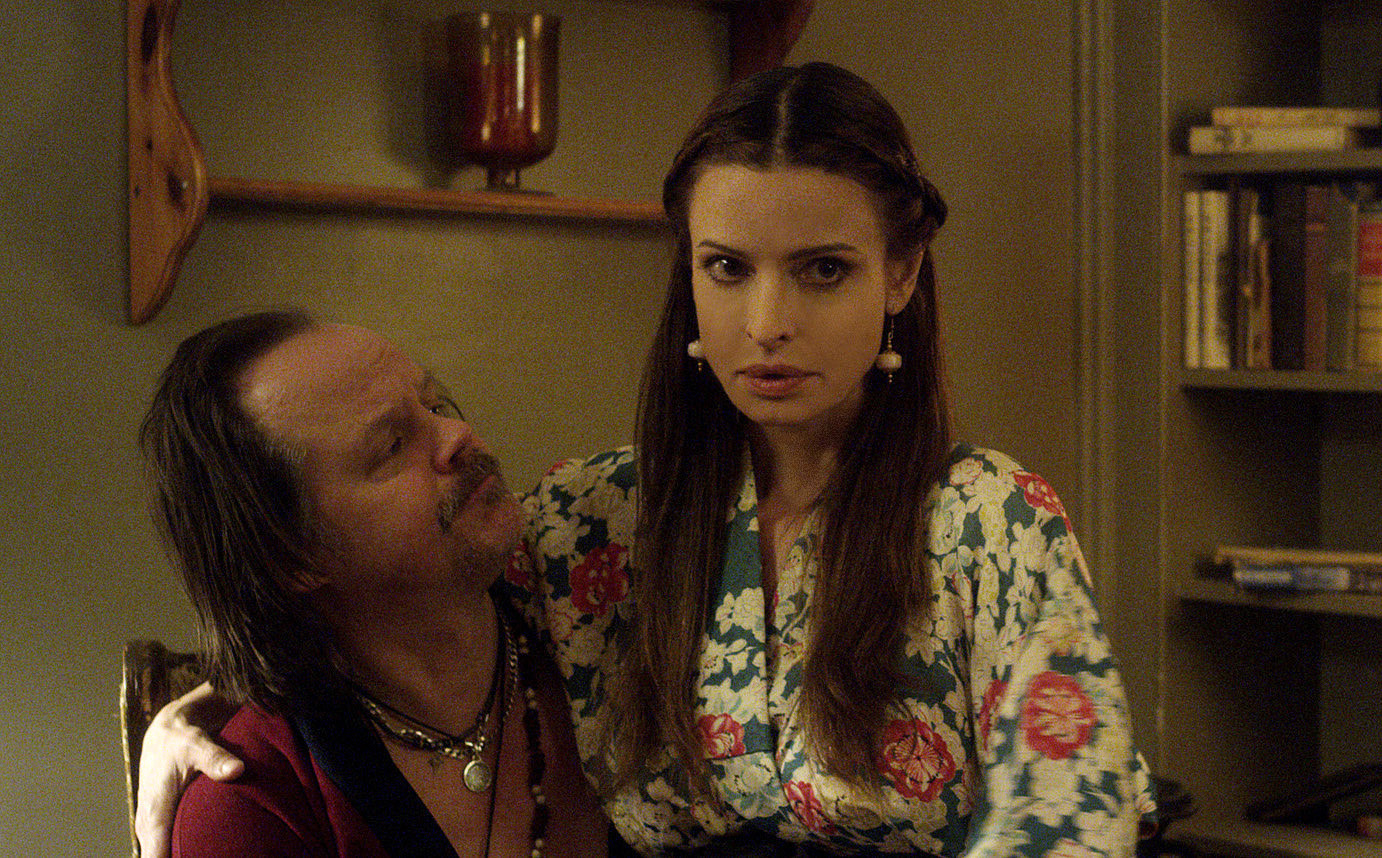