I do so much second hand shopping for my vintage clothing store Hollywood Babylon here in Portland Oregon and one of the best things about it is picking up awesome(or incredibly bad) old VHS tapes which end up for sale in the shop after I get done watching them! 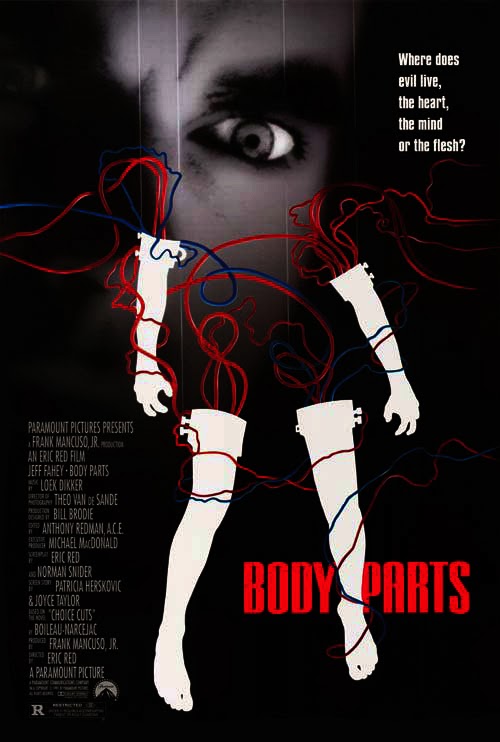 Well one of my most recent viewings was a 1991 flick called Body Parts starring Jeff Fahey and Brad “Chucky” Dourif and let me tell you this one is a great creepy ass little horror flick!

I realize that this one here has pretty much been forgotten for some reason but it’s a well done thrilling and gory tale. It follows Fahey’s character Bill Chrushank as he loses his arm in an auto wreck and is given a chance to receive an arm transplant as a subject of a new experimental procedure.

Sounds like a bargain huh? Well that’s what Bill thinks until his arm begins to have mind of his own turning him into an aggressive dickhead who lashes out at his family! He begins a quest to figure out where this new arm of his came from and comes to find he’s not the only one who’s got recent limb transplants.

Nope he meets Brad Dourif who also got a new arm and has become a successful bizarro painter because of it. Shit gets pretty wild as the recipients of these limbs start winding up dead! This ones got it all, a clever creepy story, decent acting, gore, great fx work, action, car chases and some impressive stunts and some rad explosions!

A true forgotten and underrated gem of flick with a bit of an X-Files-ish vibe to it, in fact it seems to me that the X-Files may have stolen a bit from this one in the ‘I Want to Believe’ 2008 movie. Anyway hunt this one down it’s worth it!