I’m all about some Hulkin’ out retro style! So I ran across this awesome old 1987 Incredible Hulk “Rage Cage” toy commercial where you literally pump the Hulk up to get his aggression level maxed out so he can break himself out of damn cage. Like even the calmest Hulk would be able to bust those bars, but hey it’s the effort here by the toymaker here that’s so charming. They just don’t make em like this anymore true believers! Check it out!

Ok well still not satisfied? Let’s check out this one, where for some reason The Hulk & Spider-man are endowed with the elastic super power of Reed Richards?!! Ok well whatever-this commercial is what it’s all about when it comes to simpler times! Check THIS shit out!!

I had thoughts this morning for some reason about the 1979 Plastic Man cartoon! It made me wanna feature a cool old classic Plastic Man cover. This one from 1966 sees Plastic Man caught down in the sewers battling a creature created from meat by products and sludge?! Yep! Yuck! Plastic Man had some weird ass stories and villains back in the day and this cover is one of the coolest from that era wonderfully drawn by Ramona Fradon. 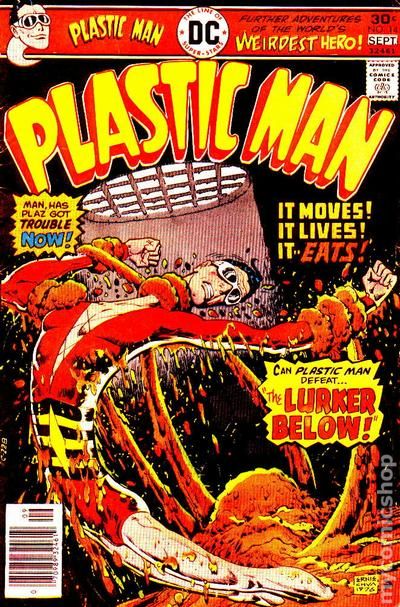 While we’re on topic lets take a peek back at that Plastic Man Cartoon!

And let’s not forget there was an elastic Plastic Man action figure too:

also here’s Robert Smith from The Cure as Plastic Man for the hell of it:

Also Plastic Man on the Superfriends! Whatta team up!

and some live action Plastic Man!

A lot of people may have forgotten about Maxx FX from the eighties, or most likely never heard of the guy at all- and what a shame that is! Maxx Fx was the guy that Barbie would have ditched Ken for if she wasn’t a total lame-o back in 1989! Unfortunately Maxx had a short lifespan, and the special fx action figure / doll only had one official costume, that of horror icon Freddy Krueger!

But if you’re a little confused let me put it this way the Maxx FX doll came with the clothing, the mask and accessories to transform him into Freddy. This awesome idea was not supposed to stop with Freddy, it was supposed to continue on with many more movie monsters, unfortunately Matchbox put the kibosh on the action figure early on.

As the awesome Maxx Fx website states Maxx Fx was a make up artist and a crimefighter and could become anyone he wanted! I highly suggest getting the whole story and taking a look at what could have been with the entire toyline, it was a brilliant idea and Matchbox totally dropped the ball!! In the meantime enjoy this cool ass Maxx FX commercial from 1989! Eat it KEN! And Barbie you BLEW it!!

Toys back in the 1970’s were pretty fantastic, they had a particular look & feel to them that the toys of today just can’t match! I’m sure there are some pretty bad ass toys out these days, but back in the 70’s it was pretty random. A toy was created pretty much for the hell of it often times, as just something cool a kid might dig. Thus bringing us to today’s showcased toy- ‘Gre-Gory the Big Bad Vampire Bat”. He wasn’t part of a popular movie franchise, he wasn’t in a cartoon or a comic book-nope he was just a cool ass vampire bat made for the kids!

The cool thing about this bat that made it a must have for all the cool kids was that you could see it’s inner organs through a see through plastic chest piece, but that ain’t all-it had a button you pressed on it’s back that pumped blood through them!

1979-80 was a cool time to be a toy vampire  bat-you could use gregory to terrorize your GI Joe’s or attack Ken & barbie on their honeymoon! Gre-Gory is a classic toy monster that should never be forgotten!!

Check out this rad video! Get the scoop on Gre-Gory!

Stretch Armstrong and Stretch Monster were all the rage in the 70’s and early 80’s, so natural Marvel & Mego had to get on board with the trend! Sure having Stretch Spider-man and Hulk really didn’t make any sense!

To me it would at least make sense to have a Mr. Fantastic stretch figure wouldn’t it?! I guess they did it far later in the game, but still these were a time when toys really were something special-either that or I’m just a nostalgic geek!!

Finally Mr. Fantastic from 2005, not sure if he was filled with the weird goo that the ones from the 70’s were though!

Whoa just ran across this awesome vintage Rom: Spaceknight action figure commercial! Rom was kinda the shit back in the 1980’s and he was first and foremost a toy before actually being a Marvel Comic book character.

Somehow though it seems his staying power wasn’t too strong as we really don’t hear too much about the guy anymore. Still viewing this rad old school commercial makes me wanna scope out Ebay and get myself one of these! As a kid I always wanted one, and from this commercial i am sure you can see why he was the talk of the block for kids-check it!

These new developments of the Alien prequel have gotten me so excited I began to have visions of an action figure only a couple lucky friends of mine had back in the day. Yes this was the 1979 Alien action figure! They actually made action figures for kids back in the 70’s for movies that were rated R!

You couldn’t go see the movie but you could make your Alien action figure feast on Barbie or Ken seven days a week!! END_OF_DOCUMENT_TOKEN_TO_BE_REPLACED

When I was a kid one of my favorite action figures of all time was Star War’s Wampa!! This thing was the coolest ever and I used to used him to not only fight Luke Sywalker but also He-man, the Hulk and GI Joe’s too! I think I liked him so much because he was the Star Wars version of the Yeti! I was very pleased as well when some extra Wampa footage made it into newer version. I like the Wampa so damn much I named my cat after him-I think though he actually does kinda look like a Wampa though. Anyway I saw this commercial on Youtube and just had to post it since it brought back alot of memories!

It’s Sunday and once again there seems to be one thing on alot of people’s minds, Jesus! So when I stumbled across this Jesus action figure commercial I had to post it! I am no stranger to Jesus, heck my family used to go to church every sunday until the monsignor stole like $60,000 from the church and was having an affair with one of my wretched teachers! To make matters worse our church’s address number was 666!! That is the truth too check out that link if you think I am shitting you!  So obviously something was going on there. Don’t you think that when they decided to build the church there they might maybe, well…..consider picking a different space?! Anway check out this Jesus action figure commercial and have a great sunday!

Yeah check this out, Wolverine needs to take of that damn mask and put on his real one! You’d think Tom Cruise from “Eyes Wide Shut” was coming over to take him to that fancy Kubrick party with Nicole Kidman!  Sorry I had a few too many last night and this is the best I could come up with today…